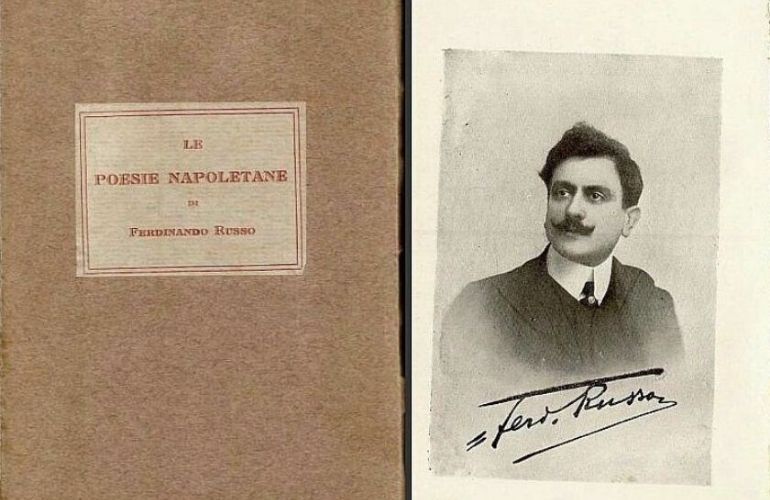 Ferdinando Russo: between music and poetry

In the panorama of Neapolitan intellectuals, Ferdinando Russo is one of those controversial personalities to whom, however, it is difficult to remain indifferent: poet and journalist, he is remembered above all as the author of even irreverent and funny songs that, in his day, were the subject of controversy and mockery.

Ferdinando Russo was born in 1866 to Gennaro, the duty officer, and Cecilia De Blasio.

He never completed his studies, becoming a young proofreader of the Gazzetta di Napoli and founding, in 1886, a literary periodical called “Il Prometheus”. Later he worked at the National Archaeological Museum of Naples.

The Neapolitan capital was the absolute protagonist of his activity as a journalist, also described with sympathy in some of his cheeky and impertinent songs (as well as in poems considered indecent and rough for the language used and the topics covered), before reaching the definitive success with “Scetate” in 1887. From there he began important collaborations with prestigious musicians, including Rodolfo Falvo – remembered by everyone for writing the wonderful “Dicitencello vuje” starting from the verses of Enzo Fusco -, producing a series of successful Neapolitan songs .

But there is an element to know about his story that can help to understand his personality in depth: Russo, in fact, was considered a bizarre character and at the limits of the extravagant and was not welcomed by other contemporary writers who did not spare him criticisms and prickly jokes. Indeed, Salvatore Di Giacomo considered him unworthy to frequent the Gambrinus because he often went around dressed in rags to enter, at night, among the taverns of sailors, criminals and poor people of the Navy; in fact, the poet loved to assiduously attend the Gran Caffè and other intellectual salons too, but during the day, arousing the disdain of the bourgeoisie. He was also criticized by Benedetto Croce, but there were those who married his cause, such as Giosuè Carducci who, in 1891, wanted to meet him in Naples. We also remember the bet with Gabriele D’Annunzio on composing verses in Neapolitan dialect from Abruzzese: it was born, almost as a joke, “A vucchella”, then set to music by Francesco Paolo Tosti and entered right into the history of Neapolitan song .

His most important poetic publications are “Neapolitan Poems”, “Neapolitan Villanelle” and the posthumous “Suspiro ‘e Pulcinella” but he is also remembered for his criticism of the Unification of Italy and the Unitarian State, so much so that he found himself in more of an occasion in court on accusations of vilification of the institutions.

Russo died suddenly in 1927, in his home in Via Cagnazzi, a small area of ”‹”‹the Stella district nestled between Sanità , Capodimonte and Corso Amedeo d’Aosta, once known as the Pirozzolia district: the verses of a new song remained unfinished on the desk.

Rest in the cemetery of Poggioreale.