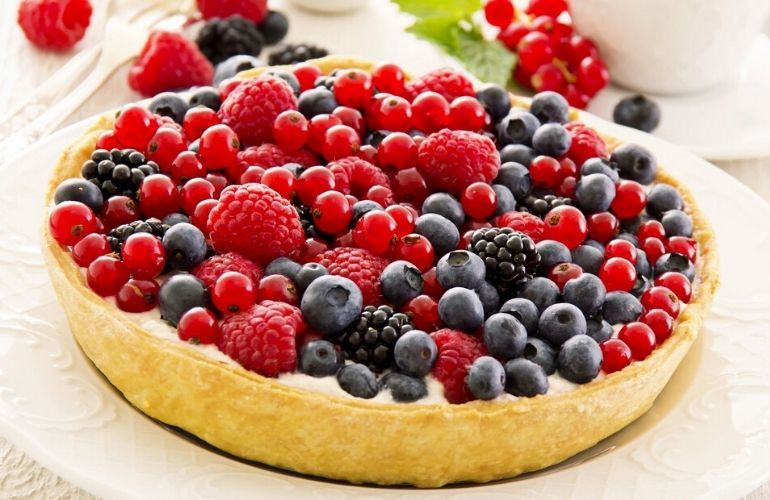 Crunchy, tasty, genuine, colorful, the fruit tart is the queen of the spring table and is irresistible in all its variations.

It is a classic recipe of our country, the dessert that is offered at every occasion because it is known that it can satisfy everyone’s palates and embellish any buffet with its bright colors to the flavor of nature and its so bewitching consistency, that enchants and kidnaps at the first bite: the shortcrust pastry, in fact, composes its base, but on the surface it is covered with custard, fruit and jelly, the latter ingredient, which makes it more “luminous”, giving it a shiny perimeter , but which is also functional to avoid oxidation. The fresh fruit cut into small pieces, in contact with the air, in fact, immediately ends up spoiling, unless it is a type of high quantity of vitamin C (such as citrus and kiwi) which, on the other hand, resist well even without protection.

Although it is a recipe of the Italian tradition, over the years many variations have appeared in the windows of the confectionery shops, from those that see the replacement of fruit with jam and jam to those in which the custard leaves its place with ricotta or chocolate creams.

We are talking about a dessert with mysterious and ancient origins: it seems that one of its ancient “ancestors” – already based on shortcrust pastry – was even present in Venice after the year one thousand, a historical moment in which sugar, just imported from the East, began to make their way into the kitchens of wealthier families.

According to experts, the first codified recipe dates back to the 14th century and is included in the manuscript “Le Viandier” by the French cook Guillaume Tirel, better known under the pseudonym Taillevent (“Tagliavento”). Later she appeared, in other variations, also in the “Work of Bartolomeo Scappi, master of the art of cooking, divided into six books” of 1570 and in “The art of well cooking” by Bartolomeo Stefani of 1662.

It does not escape that the shape of the fruit tart, cooked in the characteristic knurled molds, immediately brings to mind the concept of the Neapolitan pastiera: in fact, this dessert is also offered in a round shape even if, on some occasions, it takes on a more angular rectangular shape . Precisely for this reason, the sharing of a common origin with the famous Empress of the Neapolitan Easter table is hypothesized.

The historic center of Naples is a riot of wild strawberry tarts and tarts: the heady scent of fruit and sugar from the pastry shops that rise all around represent a mouth watering walk, every day, for residents and tourists; is the culinary idea that, as a ritual, is proposed in the rich and lush trays of desserts along with babà and sfogliatelle and which has become not only the protagonist of all Sunday tables, but also delicious and refined street food for the most greedy palates.

A pleasant break between a museum and a rigorously prepared coffee in the precious Liberty rooms of the Gambrinus!