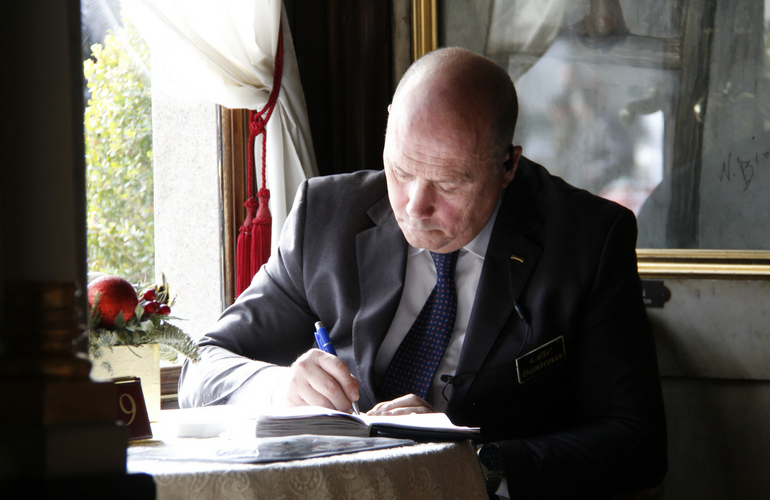 Gennaro Ponziani, one of the most famous faces of Gambrinus!

When we talk about Gennaro Ponziani, even before referring to his position as director of Gambrinus, it is important to remember that we are talking about a great man, a kind and friendly person who works every day with passion and dedication for the interest of the local and its customers.

As he himself states, directing such an important place as Gambrinus, a crossroads of different people and cultures, means carrying out several jobs at the same time, because customer care is a concept that goes far beyond the counter and invests the personal sphere, setting itself as a goal. primary wellbeing of people.

This, at least, is what Gennaro Ponziani has been doing for twenty years with passion and professionalism and that has made him, not only the director of Gambrinus, but also one of his most important icons.

from the desk manager to director!

The appointment with destiny for Gennaro Ponziani begins very early, at the tender age of 8, when, as a child, the future director begins working in the bars of the Spanish Quarters and in the various cafés of the city as Pr, unknowingly building the road that will open the doors of the Gambrinus. First of all he works as an apprentice, then as a “knocker” (a term that was once used to describe barista’s help) and finally he arrives at the most important historical place in Naples, with whom it is love at first sight!

From the day he sets foot, Ponziani runs a long and exciting road that will lead him to become not only director of the local, but also the inventor of many cafes, among which we remember the Gege (so called in tribute to his name), the hazelnut coffee and scrambled coffee, the latter born from the desire to “cuddle” customers by sprinkling with a little ‘coffee the edges of the cup to avoid unpleasant burns.

The meeting with Gambrinus also represents for Ponziani the opportunity to find an old friend, the great Giovanni Fummo, master of the 12 million coffees, that the director already knew as a kid and that, together with him and other precious collaborators, he helped make the place a real monument of Naples.

As he recounts, working at the Gambrinus and being one of his most important faces means having lived incredible experiences and having met characters of extraordinary importance, because all the greatest personalities traveling to Naples have conceded themselves and still allow themselves a break in this place.

There is one day in particular, however, that Ponziani will never forget and which marked a fundamental stage in his life and in that of the entire café: the day when the place received its greatest honor by hosting Pope Francis. On this occasion the director received as a gift from the pontiff a rosary to pay homage to his hospitality and his delicious “Papalina”, a sweet made especially for him based on babà  with cream and cream, which Ponziani will always carry in his heart.