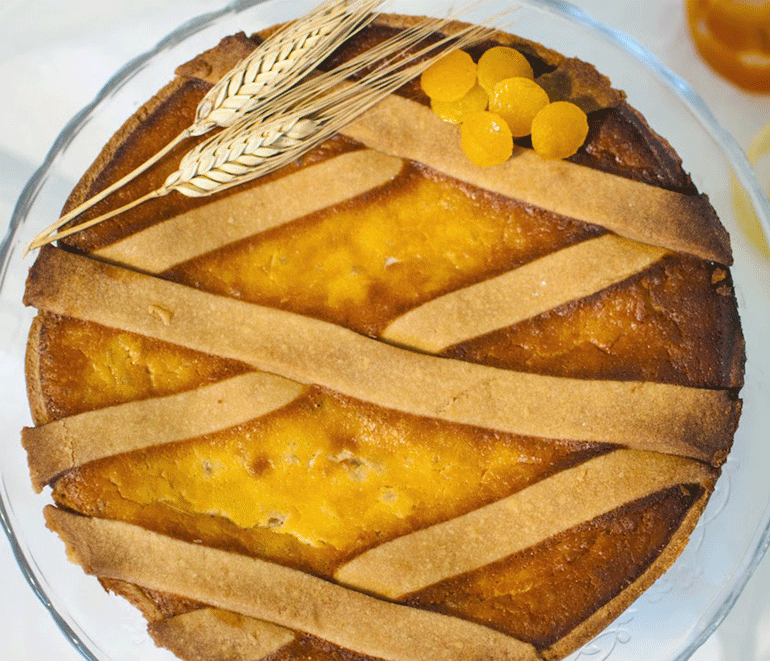 History of Neapolitan pastiera between myth and reality

La Pastiera is a typical Neapolitan dessert prepared during the Easter period, probably spread around 1600.
We Neapolitan sweet tooth and lovers of sweets, we know we love to exaggerate and the delicious pastiera prepare it even at Christmas time, also fascinated by the long process of preparation that must be respected, and each family has its secret recipe that jealously guards.

The 7 gifts for Partenope

Legend has it that the mermaid Partenope is the creator of this dessert; in spring during his stay in the Gulf of Naples, he cheered the Neapolitan people with their songs, and the locals to thank them, sent seven young girls with gifts from the earth:

The mermaid brought these gifts to the gods who were impressed by the gesture, mixing all the ingredients creating the pastiera. Parthenope was then commissioned to return to where he had received the gifts and pay tribute to the Neapolitans.

It is also narrated the pastiera made Maria Tersa of Austria smile, the queen who never laughed. Wife of King Ferdinand II of Bourbon, smiled for the first time when he tasted the pastiera, so that the king exclaimed: it took the pastiera to make my wife smile now I will have to wait another Easter to see her smile again!

In reality the pastiera was created by the cloistered nuns of the convent of San Gregorio Armeno. Very good pastry chefs mixed the symbolic ingredients of the resurrection and the orange flowers of the convent garden. They had a way to prepare their own dough: the nuns with the more thrusting buttocks and hips sat down wiggling over the dough that was placed on the cloister’s marble seats, whispering prayers.

They prepared and packaged them for the nobles and the Neapolitan upper class. When the servants went to collect the meals on behalf of their owners, opening the door they let out a scent that spread in all the alleys and comforting the less fortunate.

Tradition has it that the pastiera, a symbol of peace, is prepared on Holy Thursday, and can be kept for at least 10 days.