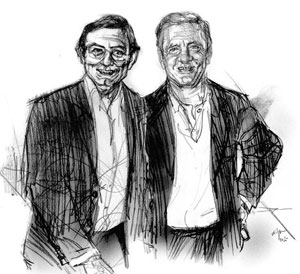 Run by brothers Arturo and Antonio Sergio, Gambrinus is a Naples ‘must see’ for tourists as well as for famous people, politicians and writers, who choose a café for their meetings.

Founded in 1860 and renovated later in 1890, Gran Caffè Gambrinus flourished until 1938 when the martial prefect decided to close it because it was considered an antifascist haunt. During the postwar period, some of its historical rooms were reserved to host the Banco di Napoli.

However, in the early seventies, a Neapolitan entrepreneur, Michele Sergio together with his two sons Arturo and Antonio and his son-in-law Giuseppe Rosati, took over the running of the establishment with the dream to bring it back to its past glory.

The first years of management weren’t easy due to people’s lack of confidence about the place as well as the recent cholera outbreak.
However after hard work, long legal battles and sacrifices, Sergio’s family has managed to bring Gambrinus to the glories of the past and also succeeding in restoring the famous art gallery and the tearoom.

Today Gambrinus enjoys a ‘second renaissance’. A favoured stage of various Presidents of the Republic who visit Naples from Enrico De Nicola to Mattarella, Gambrinus is bound to our presidents like a sort of magic.
On March 21th 2015 Sergio’s brothers were honored to serve breakfast to his holiness Pope Francesco.

Naturally, the famous people who have attended this establishment make it a landmark meeting place for businessmen, entrepreneurs, actors, singers, writers and poets.
Sergio’s brothers are now able to realize their dream: to bring Gambrinus back again as the most favoured establishment for Neapolitan locals.

Gambrinus is today the temple of Neapolitan espresso coffee as well as typical Neapolitan desserts.

Michele Sergio (Napoli 1916-1996) was the one who, most of all others, believed in Gambrinus’ revival. It is said that when he was a ‘scugnizzo’, he dreamt to become manager of the historical café. His dream came true in 1973. The first years, however, were not easy: in fact the revival of the historical local was slowed by events such as cholera and the earthquake that paralyzed the city of Naples. Thanksto the dream of a child, Gambrinus has today returned to reside as one of the top ten most beautiful cafes of the country.

Arturo Sergio is director of the company and is mainly engaged in the maintenance and preservation of the establishment, which is protected by the Historic Bond issued by the superintendence for the architectural, landscape, historical and artistic goods of Naples. However, the most important task perhaps, is to give its prestigious clientele the best ice-cream products, coffee and pastry. Sergio Arturo is also a tireless promoter of cultural activities, shows and re-enactments of Café Chantant.

Antonio Sergio founding partner of the Gambrinus S.R.L deals with the administration and accounting of the company. It is his duty to welcome and host the Presidents of Republic on a visit to Naples; he was the promoter in the quest to revive the ancient tradition of ‘outstanding coffee’; he is the company contact for voluntary initiatives hosted at Gambrinus. Antonio is also the familiar face of the Gambrinus taking care of the interviews on TV and the promotion of the espresso coffee culture in Naples.