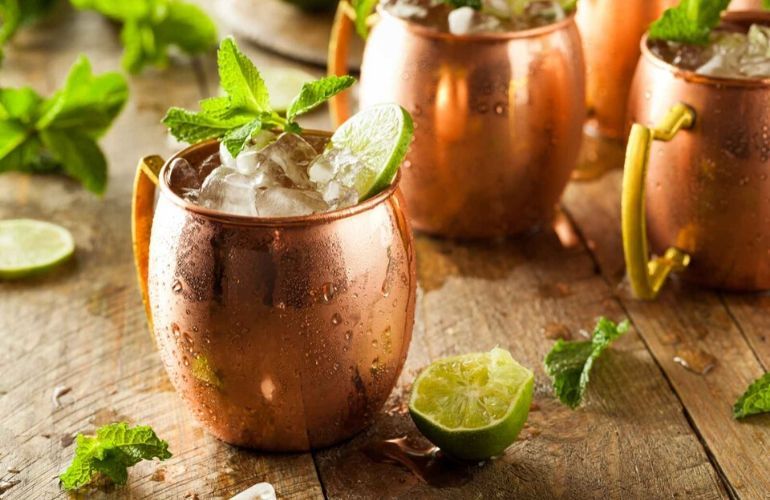 Spring has begun, quarantine is over and summer is approaching: what better time to redo our eyes (and palate) with a tasty trendy cocktail? By the way, have you ever heard of the Moscow Mule?

A fresh and disturbing long drink

If you found yourself talking to a friend at a disco or at a bar counter while sipping an alcohol accompanied by a slice of lime and served in a nice copper cup, it was probably a Moscow Mule. A cocktail that has little to do with Russia – if it were not for the vodka which is one of the ingredients – and which, indeed, has its origins in the American city par excellence, the chaotic New York.

We are in 1941, in a bar run by two entrepreneurs who are not doing well at all: struggling with many debts, they kept going. One day, however, thanks to a very special customer, the bad luck began to overturn: John G. Martin, distributor of the Smirnoff vodka who just could not conquer the Americans – probably also because of the bad relationships that have long affected the two Countries – he found himself, in fact, talking to the owner of the most popular club in Hollywood, Jack Morgan, intent on launching his brand new Ginger Beer; it was a ginger drink with a pungent and unusual flavor.

It is precisely from the union of these two projects that the Moscow Mule was born: the ingredients were combined and married in an almost divine way thanks to the intervention of the pinchy flavor of the lime that contributed to the birth of this long drink which, by now, is history.

And where does this strange name come from?

A real legend revolves around this detail: it seems that that day, at those same tables, an entrepreneur was also sitting who, in turn, found herself having to dispose of a stock of cups that carried the print of a cute donkey (mule, in English); that would have been the first “home” of the cocktail which would then have evolved into the copper version (very old fashioned) due to the temperature (it is a material that cools very quickly) and / or flavor, given that part of the taste detail of the Moscow Mule derives from the interaction of copper with lime.

Today, however, there are also those who serve it in the classic high tumbler that is used for the preparation of cocktails even if, in this version, this drink loses some poetry. But the story does not end here.

Those were the years of the Second World War: could a cocktail with a name that so directly recalled Russia ever be successful? The demand, in fact, was initially very low but, after the war, it increased dramatically and then consolidated with modernity; on the contrary, it is not uncommon to find a very trendy variant in front of which lime has been replaced by cucumber, even if this ingredient is not the one foreseen by the official recipe of the IBA (International Bartenders Association).

Preparing a Moscow Mule in a workmanlike manner means paying attention to all the phases of the recipe: fill the cup with ice, add vodka, ginger beer and lime juice and, finally, decorate with the classic slice lime (or, if you want to dare, cucumber); also allowed to use fresh ginger, which makes the flavor more intense and pungent. Do you prefer gin to vodka? Then shift the two ingredients: you will create a Gin Gin Mule (or London Mule)!