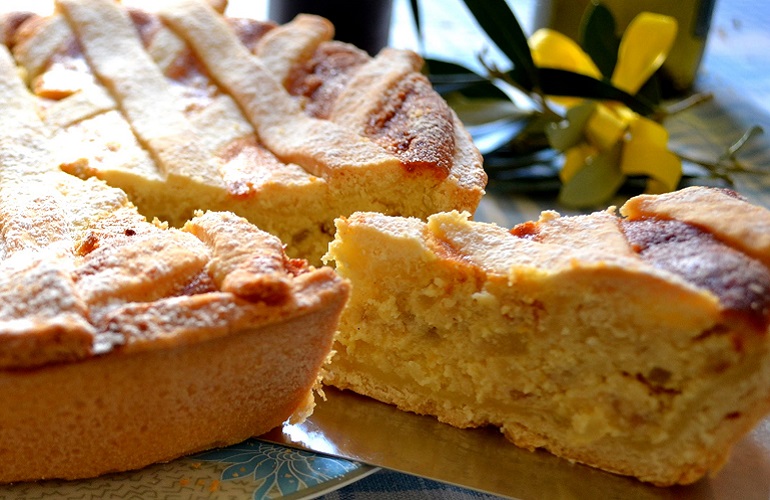 Pastiera: origins of a gluttony

The origins of the Pastiera seem to be inextricably linked to these verses, by an unknown author.

The story is that of Ferdinand II of Bourbon, tied in marriage to Maria Theresa of Austria, who is mocked as much reluctant to smile … except when you find, by chance, to taste a piece of pastiera. On that occasion his austere and cold air is suddenly abandoned. Ferdinand, therefore, enthusiastic and somewhat amazed, hopes that the chef will prepare this delicacy for him a little more often, to prevent his wife from laughing only once a year, that is to say during Easter.

Another of the many testimonies, among other things, of the fact that in Naples, always laughing is almost mandatory!

There are also other stories, which are more in myth and legend, however, that involve this particular cake.

The pastiera is to be credited, certainly, to the people of Naples, even if, with the growth of its fame and appreciation even outside of Campania, its original recipe has gradually changed from place to place, acquiring new specificities and characteristics .

Naples, always a land of fishermen and sailors, would be the stage of such a particular episode, linked to this typical dessert, to be counted among the legends of the place.

Everything would have happened on an ancient Neapolitan night in which, as often happened, the wives of the fishermen had left the baskets with ricotta cheese, candied fruit, wheat, eggs and orange blossom as a sacrificial offering. It may seem “so ‘and nothing”, as Eduardo De Filippo would have said, but in a scenario of poverty and very important economic difficulties, depriving even a few goods such as these was a real sacrifice. The intent was to make sure that the sea, thanking for the offer received, brought back to earth their husbands safe and sound. But, it seems, something much more stunning happened. A true sign of destiny, of the sea, of Providence? The waves, in fact, during the night hours would have mixed the ingredients present in the baskets, giving life to a new dessert, rich in genuine nutrients and taste, what today, in fact, we call pastiera. A gift from the sea that appeared to the incredulous eyes of women the following morning.

This legend has been analyzed and analyzed to understand more and interesting conclusions have been drawn.

First of all, we must take the hands of the clock back several centuries and remember that in the past, even in the early Christian ceremonies, it was customary to offer votive offerings with certain meanings, like milk and honey with wheat as a wish of wealth and fruitfulness. or eggs as a symbol of nativity. The analogies, therefore, we see that they are really many. In addition, even for the orange blossom there is a very precise metaphorical meaning, also quite predictable: they are the symbol of Spring! A season that is found to contain, practically always, the Easter holidays, for which, even in this case, the accounts come back.

Finally there is another theory, which would see an ancient Neapolitan monastery involved in the diffusion of the traditional recipe, even if there is no precise information either on the period in question or on the precise entity of the protagonist place.

A theory that is very plausible, but unfortunately, to date, has no concrete evidence, if you think about how many typical Neapolitan sweets were born in convents and monasteries, as offers for those who supported them economically and visited them.

In short, it can be said that the mealera is history, perhaps, more nebulous and mysterious among the desserts of traditional Neapolitan cuisine!