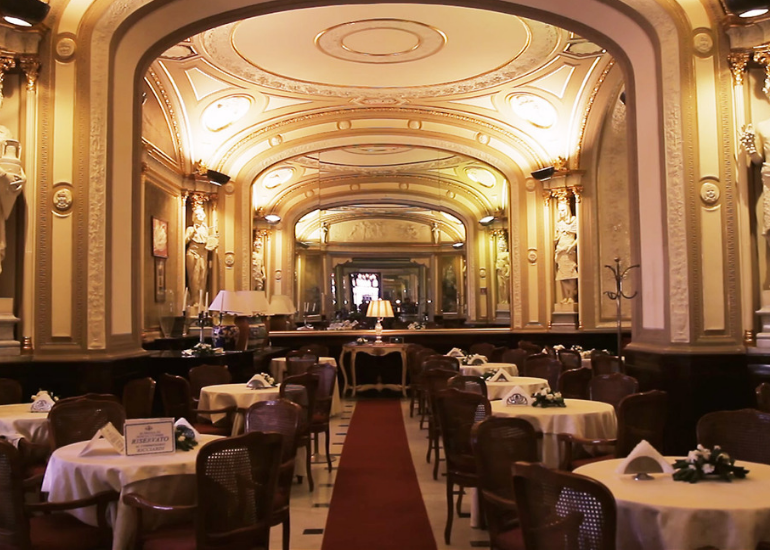 Poetry and literature at the Gambrinus

The history of the Gran Caffè Gambrinus is a truly fascinating story full of anecdotes, which over time have transformed this into the city’s most literary and historical address. The Gran Caffè Gambrinus, in fact boasts of having hosted within its walls in liberty style, the great characters of literature and poetry such as Oscar Wilde, Gabriele D’annunzio, Matilde Serao, Edoardo Scarfoglio, Benedetto Croce, Ernest Hemingway, Filippo Tommaso Marinetti , Jean Paul Sartre, Salvatore di Giacomo, Ferdinando Russo and many others who gave life to timeless literary ideas and masterpieces right at the tables of this historic café.

Masterpieces at the Gambrinus

Each of these characters therefore has a close connection with the Gambrinus, a perfect scenario in which these great authors have not only created timeless works, but have found “shelter” from a hostile and bigoted society.

There are those like Oscar Wilde, who in his period of Neapolitan exile started in 1897, was a frequent visitor to the Gambrinus, because despite the negative vicissitudes experienced in the last period of his life, he could no longer give up the best.

Even Benedetto Croce, in the period of fascism because of his ideas not in line with the regime, to “escape” the controls of the hierarchs “sheltered” gladly to Gambrinus.

There are those who like Gabriele D’Annunzio, attending the Gran Caffè Gambrinus at the cafeteria tables wrote works such as the poem “a Vucchella”, later set to music by Francesco Paolo Tosti and made famous throughout the world thanks to Enrico’s interpretation Caruso.

The same applies to Salvatore di Giacomo and Ferdinando Russo, two great “rivals” of the literature of the time, assiduous visitors to the golden rooms, who composed several works right here. The two were opposing personalities, and in a certain sense they divided the Gambrinus patrons into two factions that often resulted in real bar brawls.

Seated at the tables of this historic café, Matilde Serao and Edoardo Scarfoglio also created a great work or the first Neapolitan newspaper “il Mattino” which is still today the reference point for information in the city.

In short, it is appropriate to say that seated at the tables of the Gambrinus, the history of poetry and literature in the world was made in front of steaming cups of coffee.