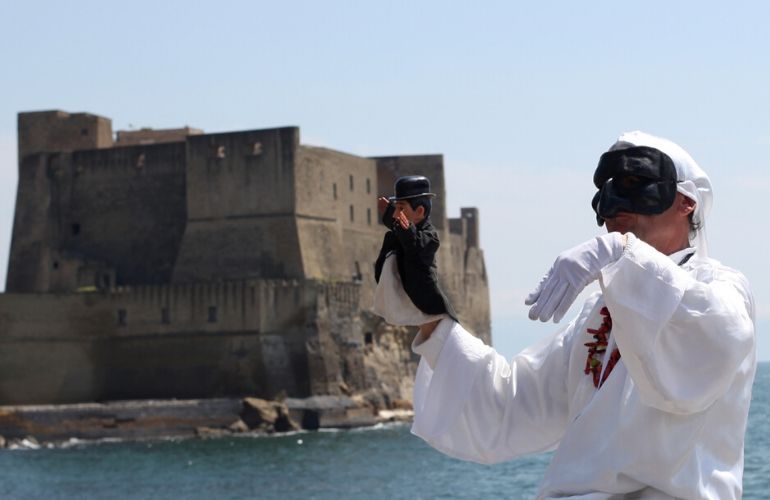 In Naples, when one wants to make fun of someone about a leaked secret that has become public knowledge, one speaks of “Pulcinella secret”.

Have you ever wondered why?

Pulcinella is the Neapolitan carnival mask par excellence, a symbol of the city and Neapolitanity: a character who fights the misfortunes and bad moods of life with the sound of mandolins and laughter, but also of good food; classic, in fact, are the iconic images that portray him intent on enjoying spaghetti with tomato sauce or a true pizza margherita.

Pulcinella’s mask dates back to the early seventeenth century, although its real roots – actually very smoky – sink in a much older time: there are those who think that its name derives from “little chick”, due to the nose hook, but also those who believe that it is inspired by a farmer from Acerra with features darkened by the country sun, Puccio d’Aniello, who in the seventeenth century joined as a jester to a company of wanderers passing through his country. Still others make a longer time jump, directly to the 4th century BC. and to Maccus, character of the Atellane, popular shows of ancient Rome: in this case, it was a servant with a long nose and a lumpy face with large cheeks and prominent belly, dressed only in a large white shirt and with his face covered halfway through a mask. The affinities with our Pulcinella, in fact, are several.

In any case, the real invention is due to the Capuan actor and playwright Silvio Fiorillo (inspired by the acerrano peasant) who, during his performances, wore a “half mask” (similar to that of Maccus) characterized by a large curved nose, a face furrowed with wrinkles and small eyes; his voice was very particular and shrill and easily associated with a black chanterelle, from which the Neapolitan word polleciniello would have derived.

In the nineteenth century all this evolved, then, in the modern form that is so familiar to us thanks to the contribution of another actor, Antonio Petito: the bicorn hat, in fact, became like the current one “with a sugar loaf” and beard and mustache went Street.

In short, even only from the first theatrical comedy that starred Pulcinella (“The constant Lucilla with the ridiculous challenges and feats of Policinella”, written by Silvio Fiorillo in 1609 but published only in 1632, after the author’s death) it’s been a long time.

But between revolutions and evolutions, this speck has remained an eternal symbol of the city of Naples and, even today, it is possible to find masked comedians who perform on the streets of the modern metropolis, enchanting passers-by: of course, from a simple theatrical character Pulcinella has conquered a specific role in history, becoming the author of proverbs but also deserving – in the eighteenth century – the construction of a theater dedicated to comedies in dialect, the San Carlino, which stood in the district of San Giuseppe Maggiore and whose stage was, in fact, the place par excellence of pulcinellate; mention should also be made of the puppet or puppet style reproduction in the puppeteers’ theaters.

But what will the Puclinella of the future be like?