Saint’Anna of the Lombardi: the historic Neapolitan church 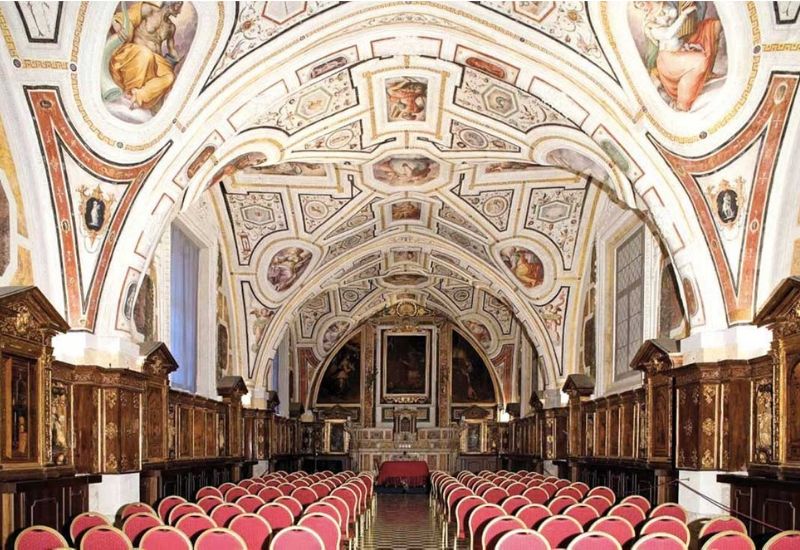 Naples is the city of the 500 domes, as it has been defined since the eighteenth century, since over the course of about 17 centuries it has stormed its territory with an incredible number of religious buildings, including churches, convents and monasteries: from the Duomo to the Santa Complex Chiara, from the Church of the Gesù Nuovo to the Certosa di San Martino, the sacred roofs that dot her skyline and make it the richest city in the world from this point of view are truly endless.

Each of these places has a history, a value, a series of memories set between its walls and its artistic beauty; a heritage that goes far beyond the religious context: among these, it is impossible not to mention the Church of Sant’Anna dei Lombardi.

The church of wonders

Located near via Toledo, in piazza Monteoliveto n ° 4, the church of Saint’Anna of the Lombardi is a real testimony of the Tuscan renaissance in Naples thanks to the contribution of some artists who have made the premises precious and unforgettable: between them, Giorgio Vasari, of which a group of works is kept inside the building.

Also known as the church of Santa Maria di Monteoliveto, it dates back to 1411 and was founded by Gurello Origlia, protonotary of King Ladislao of Durazzo, who initially sponsored its construction precisely with the other nomenclature.

The enterprise was entrusted to the Olivetan fathers but, subsequently, Alfonso II of Naples was in charge of extension works that made it so beautiful as to make it fit into the preferences of the Aragonese court. But where did this “new” name come from? In fact, in 1799 the church was ceded to the archconfraternity of the Lombardi, orphaned in his chapel (dedicated to Sant’Anna).

The Tuscan influence, instead, is due to the merchants, artisans and bankers who populated the city in those years, so much so that some artists hired for decorations and sculptures were paid for by a family of bankers, the Strozzi, who had a branch opened in Naples. This inspiration is also noticeable from the large central-plan chapels that dominate the structure, while everything else goes back a lot to the style of the seventeenth century, in a late Gothic meaning in which faint “sprays” of Gothic peep into some element.

Overall, starting from the vestibule where the tomb of the architect Domenico Fontana is located, you pass inside the central nave with its wooden coffered ceiling and the rectangular apse with a barrel vault. Each side embeds 5 chapels and, from the right, leads to the interiors, such as the Oratory of the Holy Sepulcher which preserves the terracotta sculptural group of the Compianto sul Cristo Morto by Guido Mazzoni (dated 1492) and the splendid Old Sacristy which houses the frescoes by Vasari.

But many other works are valuable and signed by great artists of the past who find their home here; so many that it would be impossible to mention them all.

The church is open to the public every day (only the museum tour is closed on Sundays) and can also be easily reached by public transport via Line 1 of the Metro (“Toledo” stop). Finding itself as the crow flies just on the walk that visitors do to go and see it, the Gran Caffè Gambrinus has hosted many tourists who stopped to taste the real Neapolitan coffee, still enraptured by the wonders they had found themselves immersed only a few minutes before; many, among other things, are also attracted by the fact that this church was the protagonist of a small scene in the fiction “Sirene”, broadcast on RAI 1-