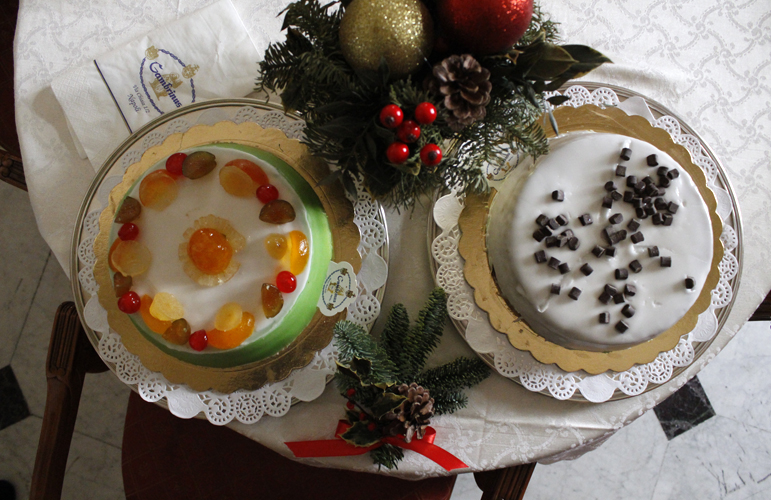 Sicilian Cassata vs Neapolitan Cassata: the challenge of Christmas!

Cassata is a typical Sicilian dessert made with sheep and sugar ricotta cheese, sponge cake, real pasta and candied fruit. Its name derives from the Arabic qas’at, “bacinella” or from the Latin “cheese”.
In ancient times this dessert was prepared in the Easter period in fact an ancient proverb says “petty who does not eat the cassata on Easter morning”, then later it was introduced in all the other festivities.

The roots of the cassata date back to the Arab domination in Sicil IX-XI Century, when the Arabs imported various products such as sugar cane, cedar, mandarin, almond and bitter orange. It is said that an Arab peasant, began to knead ricotta, with sugar and called this sweet “qas’at” that is like the bowl where he made the dough.
At the court of the Emir, in Piazza Kalsa in Palermo, the cooks wrapped this dough in a sheet of pastry and put it to cook in the oven, this was the first version of cassata that is baked.

The Sicilian origins of the cassata

The Sicilian cassata is therefore an evolution of the cassata to the oven, following the Norman domination in the convent of the Martorana, in Palermo the nuns created the real pasta, a very sweet dough made with almond flour, colored green that replaced the shortcrust pastry. It was thus passed from the cassata to the oven to the cold one.
Later with the arrival of the Spaniards in Sicily there was the introduction of chocolate and sponge cake, named in this way for its origin. During the Baroque period came the idea of ”‹”‹enriching, decorating and filling the cassata with candied fruit.

And so it was that after the introduction of all these new tasty things that the cassata underwent variations, the shortcrust pastry was replaced with sponge cake, the chocolate drops were added to the ricotta, and decorations were added to the real pasta made with candied fruit.

In 1873, the pastry chef from Palermo, Salvatore Gulì, at an international confectionery show in Vienna, introduced the zuccata (a candied pumpkin-based product) in the recipe. The introduction of sugar glaze covered with candied fruit covering the whole cake as a opaque glass could bring, the English name glass glass, from which glazed – classed – cassata.

There are numerous Sicilian variants of the cassata such as the Syracusan, Palermo, Catania, all can be very different especially in the decorations. We Neapolitans with our imagination we must always put something of our own, and for this we created the Neapolitan cassata!

The Neapolitan evolution of the original recipe

The Neapolitan cassata in general follows the original recipe but it is lighter and simpler in the preparation, we use the ricotta of cow instead of that of sheep, missing the real pasta, and the sponge cake is wet in the witch, is completely covered with dark sugar (called naspro) and the decorations are very simple, less baroque.

We are very traditionalists the cassata is for us it is a typical Christmas dessert! It is the undisputed queen of the Christmas table! Easy to make, beautiful to show, we love prepare it, and inebriate the house with the sweet scent of sponge cake and drops of chocolate that blend with ricotta, a scent that only makes us taste like water. We usually prepare it one day before serving it.

The best time comes just on the 24th and 25th when we meet with relatives and friends and after the long dinner on Christmas Eve or after Christmas lunch, between a chat and the other we expect nothing but the sweet moment; a magic moment in which the masterpiece is brought to the table, and admiring the amazement in the eyes of those who can not wait to taste it fills our hearts with joy and satisfaction