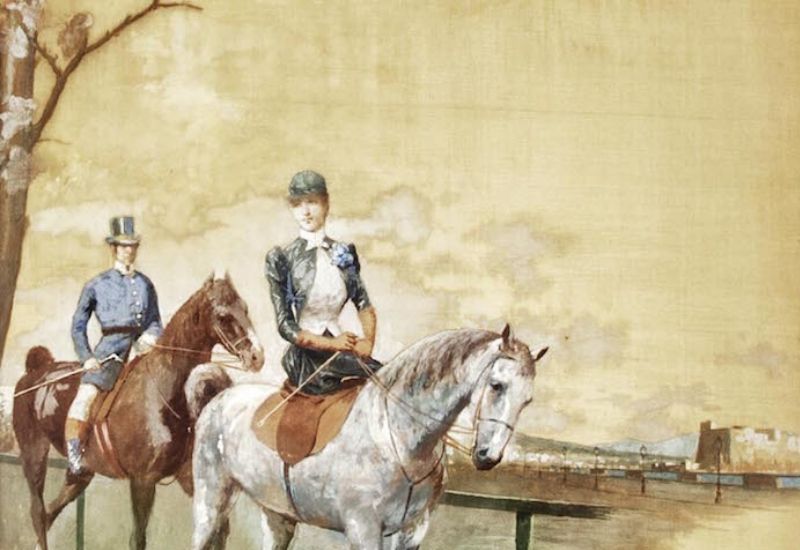 Among the paintings that appear on the walls of the Gran Caffè Gambrinus, in the eyes of admirers of clean and romantic images, a painting entitled “Trottoir” by the Apulian painter Luigi Scorrano will certainly spring to mind.

The subject of the image, in the background, is Naples with its Castel dell’Ovo immediately recognizable on the right, while trees and flowers frame two horse figures in the foreground. The delicacy with which all this is depicted is truly incredible and brings us back to the past with the mind.

But who was Luigi Scorrano and what is his story?

An artist “adopted” from Naples

Luigi Scorrano was born in Lecce in 1849, in a rather modest family.

As a boy he moved to Naples to study at the Academy of Fine Arts and was a pupil of two great names of the time: Domenico Morelli and Giuseppe Mancinelli. A relationship of reciprocal esteem, above all that with Morelli, who gradually became more and more consolidated, so much so that the master was replaced by him in the teaching of painting for two years, between 1899 and 1900, due to a problem of health.

During the course of studies, Scorrano also won several awards, dedicating himself mainly to the sacred painting and genre painting: his was a very prolific activity that led him to exhibit his works at important national exhibitions, such as the Promoter “Salvator Rosa “of Naples, also disembarking in cities like Livorno, Genoa and Rome.

It should be remembered, among other things, that many of his works were also purchased by important bodies: the Province of Naples, for example, bought “Dorme” and “Un baptism in Cassino”, the Ministry of Education, instead , “Una Rebecca della Campania” was conquered while “The ambassador of marriage” ended up at the Ministry of Grace and Justice. Even his Lecce brings some of his works into his bosom and the list would still be very long (including, of course, also the Gambrinus).

The final part of the artist’s life took place in Urbino, where he was appointed director of the Royal Institute of Fine Arts, where Scorrano taught and was director; it was there that he died, in 1924.

His works, however, continue to pay him eternal homage in all the cities that host them, with those brushstrokes that, according to many, recall in some way the style of the Abruzzese painter Filippo Palizzi.