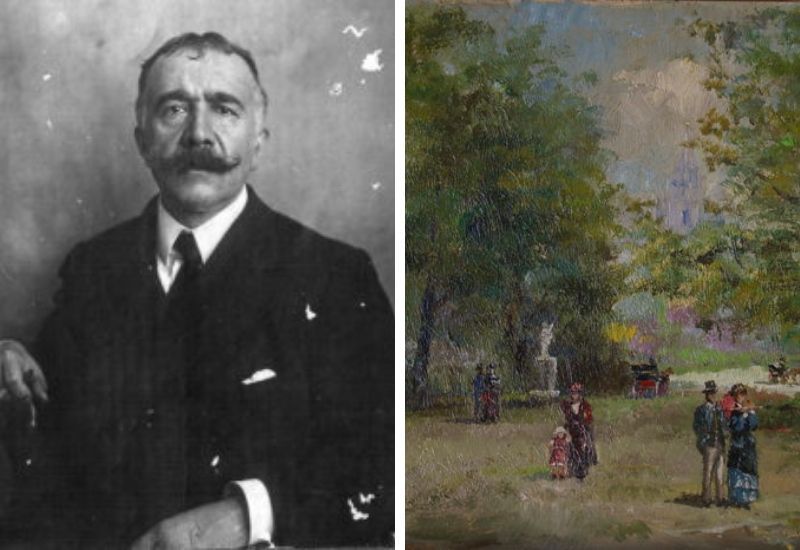 The Gambrinus has always been a cultural salon and promoter for many artists, during all the eras it has experienced since its foundation.

Witnesses are the rivers of verses of poems and songs that have been written at his tables and the many paintings that remain in his rooms to this day.

Among the illustrious and influential figures who have had the opportunity to emerge thanks to the Gran Caffè, surely to mention is Pietro Scoppetta, painter but – and this is not known by many – even poet, who took care of frescoing the vaults of the room during the teeming phase of the Neapolitan Belle à‰poque.

An amalfitano in Naples

Pietro Scoppetta was born in Amalfi in 1863 and, like so many artists today, he did not immediately “feel” his real vocation, initially devoting himself to architectural studies. Subsequently, however, he abandoned them and began a training course in the sense of art under the guidance of Giacomo Di Chirico, one of the most important painters of the nineteenth-century Neapolitan school.

Despite his origins, the man resided in Naples and, starting from 1891, he found himself involved in a series of cultural movements that had to do with the changes that the capital of Campania was going through during the period of the recovery desired by the Savoy: it was a very important phase for its formation since, while on the one hand it witnessed the creation from scratch of neighborhoods, palaces and mammoth public works, such as the Umberto I gallery and the Borsa Palace, on the other it was forced to accept a whole series of urban revisions and killing that were considered necessary to take this step. It was precisely at this time, among other things, that Scoppetta was noted with wonderful representations of the emblematic places of his homeland, the Amalfi coast and the Valley of the Mills of Sorrento, works with which he participated in various exhibitions .

From there to the Gambrinus the pace was very short. The cultural aggregation points of the city, after all, were very few: the café chantant Salone Margherita and, in fact, the Gran Caffè Gambrinus, which included it in a practical way in this environment giving it a real job; which? Cool your beautiful times with other painters! Thus Scoppetta found himself working together with many artists of the period, such as Luca Postiglione, Vincenzo Volpe, Giuseppe Casciaro, Vincenzo Migliaro and many others.

In the meantime, however, the man had not left his further activity as an illustrator for some magazines of the moment, an alternative work that he carried out also for economic questions, as happened – and still happens today – to many artists. In short, Scoppetta was appreciated on all fronts, both commercial and cultural and artistic: even King Umberto I was his admirer. However, this did not prevent him from seeking new experiences and emotions abroad, moving for some time to London and Paris, where he joined a large group of Neapolitan artists attracted by the French charm and settled there to discover its beauties and secrets. Thus he inserted himself into a pro-impressionist Italian vein and his pictorial technique was immediately infected; over time, however, the landscapes gave way to fluid representations of bourgeois life.

Only in 1910 he returned to Italy, moving to Rome and attending other influential personalities of the time.

He died in Naples 10 years later and, on that occasion, the Venice Biennale dedicated an entire personal room to him where 35 paintings were shown in his memory.

Few people know Scoppetta’s alter ego writer: in 1919, in fact, only a year after his death, the artist published a collection of poems entitled “Rhythms of the heart”, but under the pseudonym Pictor Petrus. An inspiring muse was a young student for whom the man, already in old age, had suffered a strong but very sweet and delicate yearning for love.