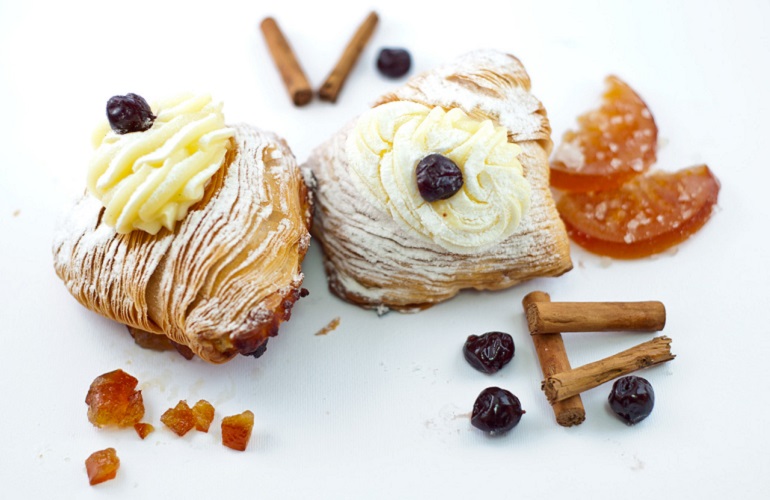 The grandmother of the sfogliatella is called Santa Rosa

By Simona Vitagliano
Some time ago we talked about the origins of sfogliatella, par excellence sweetness, born, in Itially, in a slightly different conception, by the expert hands of some cloistered nuns of the convent of Santa Rosa, in Conca dei Marini, on the Amalfi Coast, 4 centuries ago, and later revisited by Pintauro in 1800.

In fact, we can say that Santa Rosa is a sort of “grandmother” of the sfogliatella for this reason.

Aesthetically, there is certainly a detail that jumps to the eye, when you look, in comparison, a sfogliatella and a Santa Rosa: the outline.

While the sfogliatella is thinner in the sheet and elongated in shape, its distant relative, in fact, has a closed, almost geometric, triangle-shaped perimeter. The reason is simple: precisely because of its monastic origins, the Santa Rosa had been created by the nuns in the form of a monk’s hat!

In addition, even the fillings are different: if the sfogliatelle can be, today, tasted with souls of melted chocolate, cream or chantilly cream, the original Santa Rosa follows the traditional recipe, where its interior is obtained with an amalgam of semolina, milk , sugar and dried fruit softened in rosolio (or limoncello), a very light liqueur, characteristic of the Neapolitan area, derived from the petals of the rose, as the name suggests.

Even the “purpose” with which the two variants originated is different: if the Santa Rosa was born almost by chance, from the hands of the mother superior Clotilde, soon we realized its taste and its delicacy, so much which became an offering for the families and benefactors of the convent, who thanked the sisters with a few coins, bringing home some of these tasty sweets; the custom was so successful that it was established that the leaflet should take the name of the place where it was created and it was also thought that the most suitable day for its distribution was that in which falls, in fact, Santa Rosa, that is 30 August. In fact, to get to the laboratory of our Pintauro took 200 years! At the right time, make the changes and changed the name to sfogliatella, this dessert became a culinary craft work to be sold on Neapolitan soil through the premises of the shop: walls from which the sfogliatella is “expatriate” quickly, becoming a symbol of Naples to all effects, prepared and sold in confectionery laboratories throughout the city.

Where to find the Santa Rosa?

Centuries have passed since that day when the workshop of Pintauro began to propose the sfogliatella to the Neapolitans and tourists, but its cult is, now, traditional and historical: what is more difficult to taste, however, is the original one of the Santa Rosa, which is not so easily purchased in the city.

Of course, to be on the safe side, you can take part in the Conca dei Marini festival, still active today, where it is possible to taste this dessert in a modern, slightly modified recipe that wants the filling made of semolina, ricotta, candied fruit. , eggs and aroma of cinnamon and sugar, and the dough, obviously curly, made by mixing flour, salt and water; the final garnish, which is always visible on the “cocuzzolo” of the puff pastry, is made of custard and syrup cherries.