The largest pastiera in the world has been baked in Naples! - Gran Caffè Gambrinus

The largest pastiera in the world has been baked in Naples!

by Simona Vitagliano
Saturday 13 April 2019 was a memorable day for Naples.

The Gran Caffè Gambrinus, in fact, offered passers-by a real Guinness World Record: its mega pastiera of over 2 meters in diameter!

The district of Piazza Trieste e Trento was literally crowded with curious, hungry and gluttonous people from all over the world and all with a different history: from the passing Canadian tourist to the in love husband who came to grab a piece to give to his wife (“ I know ‘diabetic, nun m’a pozz’ magna ‘! “he jokingly stated to the microphones of Fanpage), from the rouged ladies and proud of the fact that” these are things that can only be done in Naples, it is our patent “to the same master pastry chef who was in charge of cooking, from the very young to the more elderly, everyone tasted the record-breaking pastiera and let themselves be captivated by its aromatic flavor and its crumbly and tasty consistency.

In short, the myth according to which “gigantic” could not be synonymous with “excellent” was also dispelled!

And speaking of measurements, what were those of the maxi dessert signed Gambrinus? 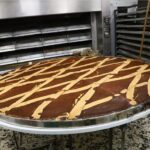 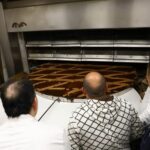 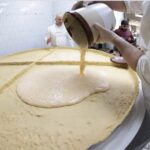 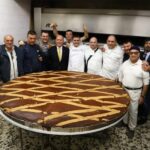 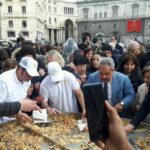 The diameter invested, to be precise, two meters and ten centimeters of space and this food marvel was exhibited on the premises of the historic Neapolitan cafe from Thursday 11 April because, as we know, the best pastiera is the one that “has rested”!

Record numbers also for the staff who did everything: at work on the work, in fact, there were even four pastry chefs who, in unison, took care of following the most delicate phase, that of cooking in an extra mold -large inside a special oven made available by a bakery, which lasted four hours.

The result was a super pastiera, defined as “Bourbon” by experts, weighing 305 kg, officially returned to the Guinness Book of Records and with a commercial value of about 7 thousand euros. A delicacy that turned out to be an opportunity to pass Easter greetings to passers-by (who devoured it in half an hour!) And to bring the Neapolitan gastronomic identity to the world.

In short, a unique event of its kind in which in Naples, as always, they found themselves sharing the same “dish” with people from any background and cultural background.