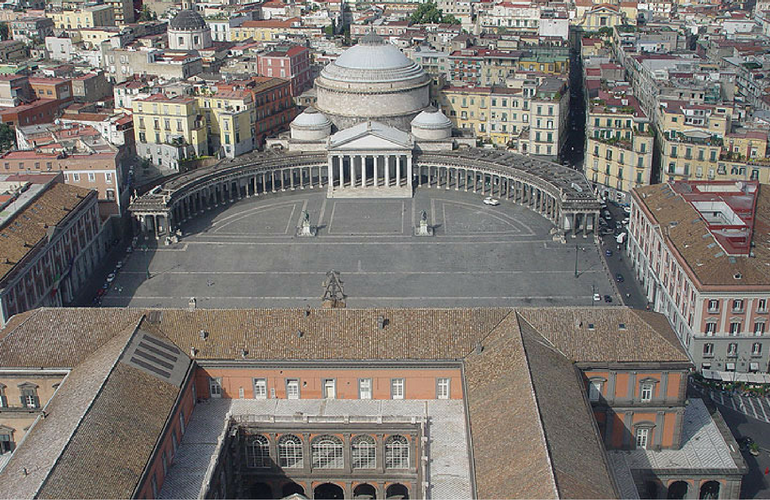 The story of Piazza del Plebiscito

The Neapolitan artistic and cultural heritage is immense. Every corner exudes magic and emotions. Between castles, historic streets, palaces and squares our eyes fill with wonder at every step.

But the symbol of Naples is definitely Piazza del plebiscito. Located in the heart of the city, surrounded by the Basilica of San Francesco di Paola, the Royal Palace, the Prefecture’s Palace and the Salerno Palace is one of the largest squares in Italy and it is here that at the end of the 800 was founded historic and renowned bar “Gambrinus”.

The origins of the most important square in Naples

Initially Piazza del Plebiscito was, and was for centuries, only an irregular area, where folk festivals took place, until in the seventeenth century, the construction of the Royal Palace was begun by the architect Domenico Fontana. This palace was called “New” to distinguish it from the Old Palace built in 1500 at the beginning by the vice kingdom of Spain as a royal residence. Following the construction of the Palace, the square took the name of Largo di Palazzo. Numerous parties and games were celebrated in these years. The most famous was the Cuccagna which consisted of reproduction in papier-mà¢ché and wood of a hill, a villa or a castle filled with food of all kinds and on set days after 22 o’clock following two shots of a cannon as a signal for each participant. to take as much stuff as possible.

In the 18th century the architect Luigi Vanvitelli carried out restoration work at the Royal Palace. It was he who built the eight niches where in 1888 the statues of the kings of Naples were then exhibited: Roger the Norman, Frederick II, Charles of Anjou, Alfonso of Aragon, Charles V, Charles III, Gioacchino Murat, Vittorio Emanuele II .

Only with the arrival of Charles III, however, the Royal Palace became a real noble palace, with furnishings and works of art.

Following the fire of 1837, Ferdinando II demolished thee Old palace and redo the right wing of the Royal Palace.

Subsequently by the will of Ferdinand IV the church of S. Francesco di Paola was built, as a king’s vow to that saint who had interceded for him to restore the Bourbon crown. The realization of the project of the Church was entrusted to Piero Bianchi who decided to place two equestrian statues, by Carlo and Ferdinando di Borbone and built a semicircular portico to give the square a more monumental tone.

The current name of the square was chosen after the plebiscite of 21 October 1860 decreed the annexation of the Kingdom of the Two Sicilies to the Kingdom of Sardinia.

Today this marvelous square is a destination for millions of tourists who are always enchanted by the many attractions and architectural beauties that our city offers. And certainly, admire it while sipping one of the best coffee in Naples, will make it even more enjoyable.