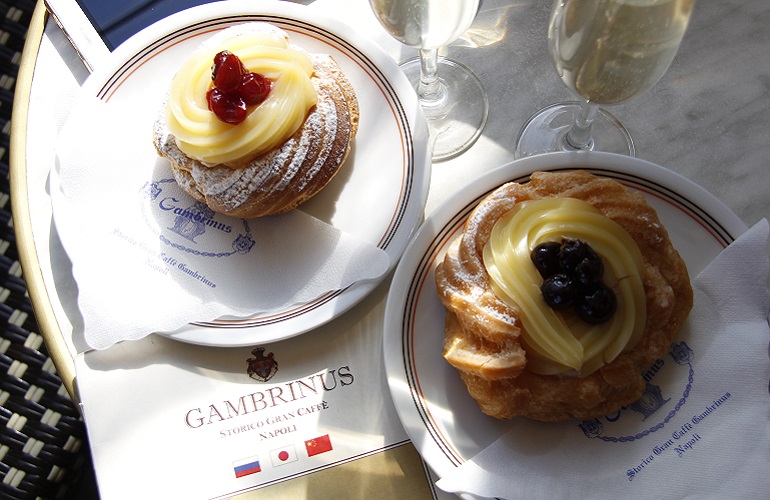 Prelibatezza for the eyes and for the palate, the zeppole of St. Joseph delights Neapolitan and Italian on the day when the celebrations of the saint and the Father’s Day occur.

But what are the origins of this unique and special dessert?

What is certainly known is that the zeppola of St. Joseph has landed for the first time on paper in the historic treatise “The kitchen Teorico Pratica”, of 1837, of the Neapolitan gastronomist Ippolito Cavalcanti, Duca di Buonvicino.

The rest of the stories that are told about its origins, however, are all a bit ‘nebulous and different from each other, not only for content but also for the places they involve. After fleeing to Egypt with Mary and Jesus, St. Joseph found himself selling pancakes to provide for the sustenance of the family, once landed in a foreign land. From here the tradition would have originated that would see in these sweets the typical symbol also of the Father’s Day, in honor of Saint Joseph.

Another version would imply the fact that St. Joseph is the patron saint of carpenters and craftsmen, for whom, once, on this occasion, the “Carpenter’s feast” was celebrated, with copious sales of wooden toys of any type and any form. The parents used to give one to their children, but when, in 1968, St. Joseph’s Day also became Father’s Day, the roles were reversed and the children began the long tradition of giving gifts to their father.

On March 17th, in ancient Rome, it was a very important date: Liberalia was celebrated, parties in honor of the wine and wheat deities, Bacchus and Silenus. It was a day dedicated to wine and wheat fritters, which were fried in hot lard.

The day of St. Joseph is only two days later, so it would be so that “descendants” of those pancakes have become a symbol of this holiday. Probably it is simply a recipe that has evolved over the centuries to become what we know today.

Then there is a version that sees the Neapolitans as 100% protagonists.

The classic zeppola of Saint Joseph, as we know it, was born as a conventual sweet, but here too there are still many doubts: some speak of the convent of San Gregorio Armeno, some of that of Saint Patrizia, who attributes its manufacture to the nuns of the Cross of Lucca and those to those of Splendor. The fact is, however, that tradition has it that the Neapolitan friars used to exhibit their culinary art by frying the zeppole on the street, in front of their shops.

There is also to say that March 19 was always celebrated the end of winter with the famous “agrarian purification rites”, in which, in many southern countries, large bonfires are lit and prepared large quantities of pancakes.

Although the recipe from Campania includes basic ingredients such as flour, sugar, eggs, butter, olive oil, custard, icing sugar and cherries in syrup for decoration, there are many variations throughout the boot that make preparations for it. different in different regions.

The typical Apulian zeppole, for example, is fried in lard just as ancient recipe would like; that itrana (province of Latina) provides coverage also based on honey instead of sugar; the Sicilian has a cylindrical shape and sees among the ingredients also rice, orange honey and cinnamon; the queen zeppola (from Reggio Calabria), on the other hand, is called zippula ca ‘ricotta, and looks more like a cream puff made with flour, sugar, eggs, vanilla and lard and stuffed with ricotta, sugar, cinnamon and grated lemon; the Molise and Cosentino zeppole are very similar to the Neapolitan ones, while the Teramo ones (from Teramo), which can also be found from the Gran Sasso up to the coastal area, are once more the cream puffs, but this time larger, filled with white custard with adding a sour cherry.