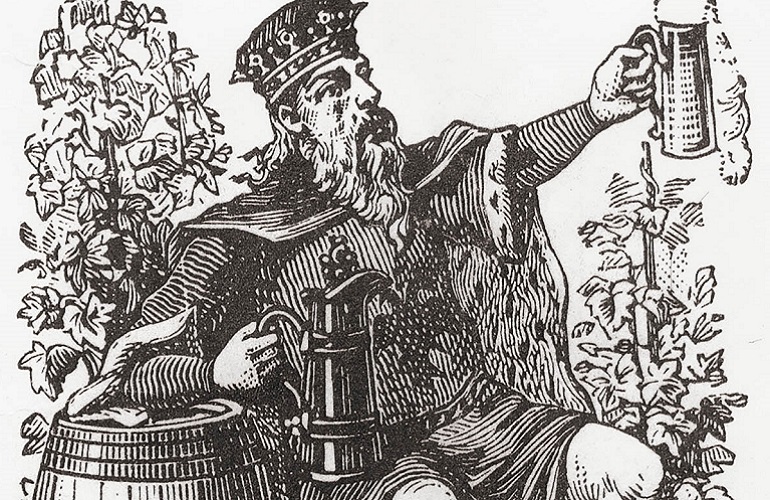 The only certain thing that is known about Gambrinus is that it is the “bacchus of beer”.
Patron, King and inventor of this drink so loved all over the world, has given its name to our local, but there are many legends, stories and anecdotes that are told about him.

It is hypothesized that the name Gambrinus derives from the Latin cambarus (celleraio, assigned to the cellars) or from Ganeae birrinus (the one who drinks in a tavern) but also from the Celtic camba, a term that indicated the pot where the beer was prepared. Still, however, it could derive from an error in the transcription of the name “Gambrivius”, which appears in an engraving which we will discuss later.

The most reliable hypotheses: Jan Primus, King of Flanders and John the fearless

The generally accepted idea is that which links the name Gambrinus to the figure of John I of Brabant (1254-1298), King of Flanders (in present-day Belgium). His name, in Flemish, would be Jan Primus.

Others link to this name, however, John of Burgundy (1371-1419), known as John the fearless, Count of Burgundy, precisely, Artois and Flanders, by some considered inventor of beer with malt and hops. In particular, John of Burgundy, who was a prominent figure in the 100-year-old war, died assassinated by the escort of the French Dolphin, in an encounter that, instead, should have sanctioned peace. For many this death would be an echo to that of the legendary Gambrinus, which took place in a duel, at the hands of a French knight. In this case too, in fact, there would have been a deception. The knight would have turned to his rival, saying, “What’s up? Do you fight against me? “So that he would distract himself and look back to see who was behind him; at that moment the mortal blow would have been inflicted to him, followed by these words: “I know that your second self was the beer that gives strength, drank from you before facing the trial. Being afraid, I had to hit you behind to have any hope of surviving. ”

All this, although the scarcity of historical evidence, would also be proven by a colored engraving found in a German book of 1543: “The origins of the first twelve ancient kings and princesses of the German nation”. This engraving shows a certain “Gambrivius, king of Brabant” with a thick red beard and in armor, near a sheaf of wheat, with a floral wreath made, it seems, just of hops inflorescences.

The humanist Johann Georg Turmair, who lived in Bavaria between 1400 and 1500, speaks of Gambrinus in his “Annales Bajorum” (Bavarian Annals): in this version it would be the son of Marsus, a (hypothetical?) Germanic king of the pre-Christian era , famous for the amount of beer that he drank. Gambrinus would be an enlightened king, also founder of the Hamburg river port, a keen beer user.

The German poet Burkart Waldis, however, in 1543, even introduced in the myth the Egyptian goddess of motherhood and fertility, Isis, who would teach Gambrinus the art of beer.

Still, other sources would date this character in the time of Charlemagne, being even the brewer at the court of the founder of the Holy Roman Empire.

There is even a legend that would like our “hero” to drink 117 pints of beer a day!

Another story would speak of an unrequited love and a lacerating desperation of our protagonist who, on the threshold of suicide, would make a pact with the devil to forget the object of his desire, in exchange for his soul … as an offer , the King of Evil would have given him the beer recipe that would have had the success that we can well imagine, including … the passion of the young girl who, however, the Gambrinus had, finally, forgotten, to the point of not recognizing it when he rushed to his inn to drink beer!

Finally, there is a myth about a challenge. Gambrinus, more or less in 1100, would become head of the Brussels brewery guild who, to test its strength and determination, organized a force contest: a barrel of beer had to be carried by arms for a certain distance. Gambrinus, smart and thirsty, would open the barrel, drank all the contents and transport an empty jar, winning the race and becoming, in effect, the King of Beer.

In short, there are many common lines between all popular stories and legends, but that of Gambrinus is a character, even today, shrouded in mystery.