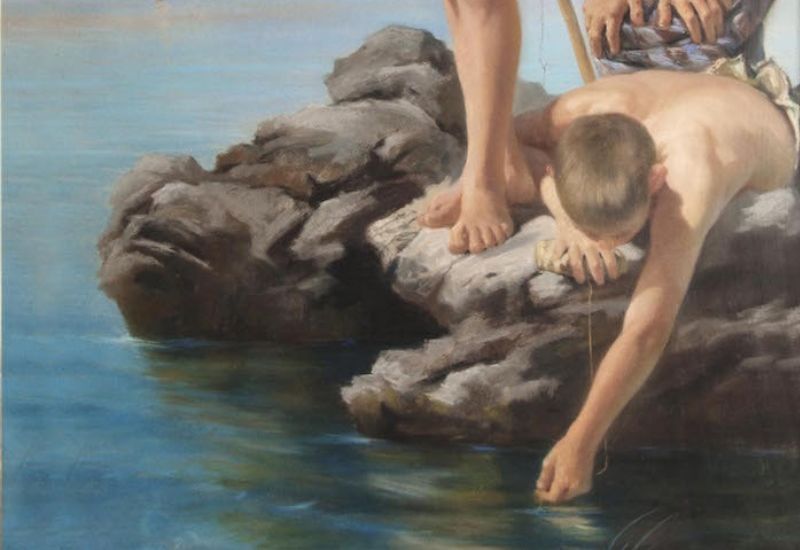 In the second room of the Gran Caffè Gambrinus, along with other period paintings, it is possible to admire a canvas by Gaetano Capone called “Sommozzatori” which depicts a classic maritime scene, where the water appears so realistic – in those pastel colors – that it is to wonder where art ends and reality begins.

But who was this painter and what was his story?

A maiorese son of art

Gaetano Capone was born in 1845 in Maiori (which dedicated his waterfront to him) by Luigi, a figurinist painter from the same town.

During his life he was a pupil, at the Neapolitan Institute of Fine Arts, of Tommaso De Vivo, another painter active above all in the Neapolitan, and, at the Academy of San Luca in Rome, by Cesare Fracassini, until he became the greatest exponent of the so-called “Painters of Maiori” (also called “Costaioli”), bearers of a veritable independent pictorial current.

He began his career in the profession with Fracassini in 1864, participating as a helper in the realization of the frescoes in the central nave of the Basilica of San Lorenzo outside the walls; unfortunately, however, the master died very young, at the age of only 30, due to a typhoid fever, for which Capone was forced to return to Naples to continue his studies. It will be right here that he will meet Domenico Morelli and Filippo Palizzi, the masters from whom his painting will acquire that very particular verism mold that is well known also in the painting hosted at the Gambrinus.

Returning to Maiori, he began to put into practice all that he had learned thanks to the Neapolitan School and his style was definitively consecrated with the National Exposition of Naples, an important link that put him in contact with the general public. Over the years he has participated in many national events and exhibitions, including those in Rome, Palermo and Venice.

His specialties were different, starting from popular everyday life and coming to the marine and landscape scenes that fueled his imagination and his brushes for much of his business: before he died in his hometown in 1924, at the age of well 79 years, in fact, he also dedicated himself to watercolor to share with the world (soon, in fact, his fame became international) the breathtaking views of Amalfi to which he was so attached.

Today, we find some of his murals in the room used as a magistrate’s court of the Church of the Holy Rosary in Maiori (1895), as well as some paintings in the Church of S. Maria a Mare, while other works are preserved in the territorial Abbey of the Holy Trinity of Cava de ‘Tirreni and in the churches of San Quirico in Fisciano and of the Madonna dell’Assunta in Casal Velino.