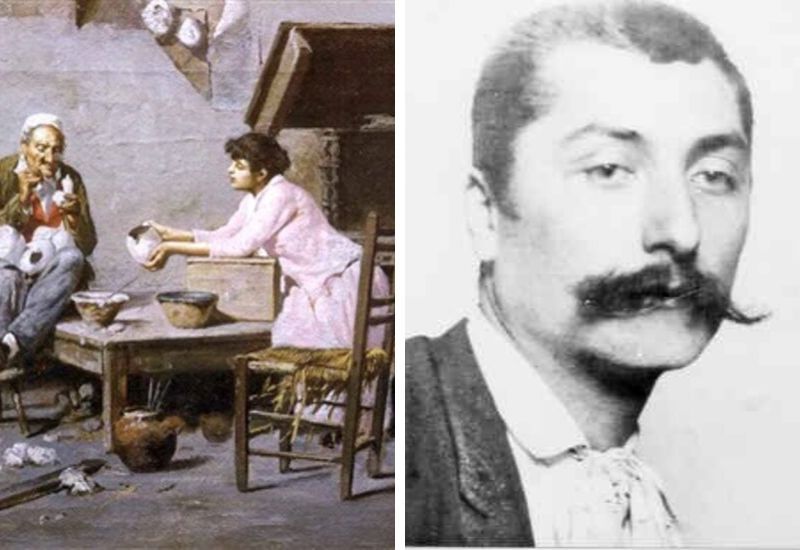 Among the artists who appear in the halls of the Gambrinus, the painter Vincenzo Volpe, a native of Grottaminarda, in the Avellino area, deserves a special mention, but moved very young to Naples, a city that would have adopted him until his death.

Lived at the turn of the nineteenth and twentieth centuries, Volpe attended the Institute of Fine Arts, later becoming a pupil of Domenico Morelli, covering all five classes of drawing.

The artist’s personal production is so vast that it is divided into three phases:

In 1873 he won the annual Academy Award, a recognition that earned him a bit of notoriety: in fact, soon, his portraits and landscapes, works belonging to the new Verista school that was strenuously opposed, to that era, to academic conventionalism. The first exhibitions took place in Turin and at the National exhibition in Milan and received considerable support. In 1902, he then took the position of professor who had been Morelli’s and had, in turn, several students.

In 1890 he was also invited, together with other painters, to decorate the Gambrinus, where he painted “The watermelon seller” (“‘O mellunar'”) which still stands in its rooms.

In 1900 he even won a study at the Royal Palace, where he had been specifically requested by King Umberto I.

He was president of the Academy of Fine Arts of Naples and a member of the Superior Council of Antiquities and Environmental Heritage.

His scenes of simple, serene and familiar life were much appreciated by his contemporaries: his talent, then, was inherited by his son – Geppino Volpe – who also became a painter.

It should be remembered that Volpe participated in four editions of the Venice International Art Biennale; he is remembered today in his Grottaminarda by a bronze bust visible at the entrance of the Town Hall and he was also headed by the Technical Commercial Institute of the town and a street in Avellino.

His works, nowadays, can be admired in traveling exhibitions that are organized around the region.