What are the most beautiful historic cafes in Europe?

The official date of the arrival of coffee in Europe is 1683: the Turks of the Ottoman Empire settle in Vienna for a few months, until the European armies are not limited to forcing them to give up. In the enemy camp, the soldiers of the armies win coffee beans and dust so that at the Vienna court they start drinking this new infusion.

The spread of coffee is, therefore, datable at the end of the 1600s. Soon from Vienna to Paris, then to Venice and then to the families of families of Europe, we begin to appreciate the new drink, intriguing for its intense new flavor.

Coffee, in short, becomes a fashion and from the Palaces of the rulers moves in the streets with the birth of the first Coffee Shops, later Cafeterias, Cafes, Coffeehouses, Kaffeehaus, Cafes, variously named a second of the city of the dove city arise more and more frequently.

The prestige of these gatherings becomes more and more to be frequented by famous poets, writers and musicians who make it the elective venue for meetings, discussions and, even, a place where to find the right inspiration to create and compose. In all the capitals of the Old Continent, therefore, we are not seated at the Cafe just to taste specific drinks – coffee, tea, chocolate, beer, fine wine – or culinary delicacies and pastries by the wonderful chefs of the time and the most imaginative masters pastry chefs and ice-cream makers (or ice-cream makers) that coffee operators engage to offer the best to their patrons. Many of these activities are still active, regardless of the centuries and real historical guardians custodians of the oldest and the memory of great personalities. Impossible to talk about all the historic cafes that still shine in the big European cities. We mention, among others: the Café de la Paix, Le Procope in Paris; the Caffè Florian, the Caffè Quadri, the Caffè Lavena of Venice; The Ancient Greek Coffee of Rome; Café Central, Café Sacher, Café Mozart, Café Landtmann in Vienna; the Café Louvre, the Café Imperial in Prague; the Café Commercial in Madrid, the New York Café in Budapest; Café Chris from Amsterdam; the Café A Brasileira in Lisbon and the Café Majestic in Porto.

Walking through the historic center of the Austrian capital, in every corner a Kaffehaus is full of history, charm and, of course, delicious cakes and tasty coffees. One of the most important and prestigious cafés is undoubtedly the central Café in the heart of the Hapsburg city. Inaugurated in 1876 by the Pach brothers, it immediately became a meeting place for historical figures: Sigmund Freud, Adolf Hilter, Vladimir Lenin, Adolf Loos, Theodor Herzl, Leo Trotsky, Josip Broz Tito. What is most striking about this coffee is the monumentality, grandeur and imperiousness that impresses the visitor, who comfortably holds the tables has the opportunity to taste typical Viennese dishes. 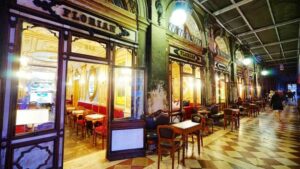 The Serenissima was for many centuries the main port of the Mediterranean. Here came the most precious fabrics, the unobtainable spices, the exotic dishes. When they open the doors of the first cafés in Piazza San Marco it immediately became a success. The historical scope of the cafes is so epochal that Carlo Goldoni will be writing a comedy “La Bottega del Caffè” dedicated to these new meeting places. Even today it is possible to visit these “monuments” of the history of Venice. The most prestigious Italian coffee (and perhaps also the first) is the Florian. Inaugurated in 1720 by Floriano Francesconi with the name “Alla Venezia Trionfante”, it was renamed “Al Florian” for the way of saying of its patrons “we go to Florian”. Florian frequenters, to name a few, Giacomo Casanova, Giuseppe Parini, Silvio Pellico, Ugo Foscolo, Charles Dickens, Johann Wolfgang Goethe, Jean-Jacques Rousseau. 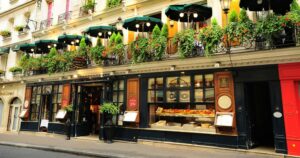 It is said that it was the first coffee in Europe. It is no coincidence that this record holds it is simpler in every field. In 1686 the restaurateur Francesco Procopio dei Coltelli decided to observe the place changing his name in “Café Le Procope”. In the French capital (as well as in other European capitals such as Naples) coffee is already known but still a few; the merit of this great place was to have spread the fashion of black infused in France. This place was successful thanks to the famous lemon sorbet created by the workers of Le Procope. Procopio propose, in his famous café, the coffee and for the second time it was a resounding success. Among the great characters that have passed there: Jean de La Fontaine, Voltaire, Napoleon, Honoré de Balzac, Victor Hugo and Robespierre. 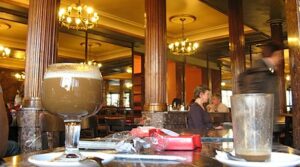 Located in the center of the Spanish capital, it is one of the oldest cafés on the Iberian Peninsula. Founded in 1887, it is both a bar and a restaurant and, undoubtedly, the most famous literary café in the city as a meeting place for artists and poets. Closed in 2015, it leaves hope for a new reopening in 2017. 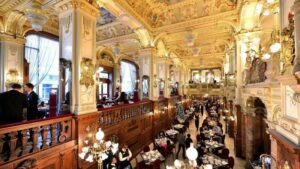 According to many, the most beautiful coffee of the Old Continent. Not only kings, emperors, statesmen, intellectuals, but also patrons and tourists from all parts of the world have passed through these impressive and lavish halls. Founded in 1894 in the heart of the Hungarian capital, it is decorated with frescoes, baroque columns, imposing chandeliers, red armchairs and sofas, and magnificent mirrors. The best Hungarian pastry can be tasted in this historic café. A must.

Since 1860,in Piazza del Plebiscito, it was a meeting place for artists, politicians, journalists, writers and poets. Art nouveau art gallery, with paintings and statues of the best exponents of the School of Posillipo, hosted café chantant shows. Gambrinus visited the Princess Sissi – who in 1890 tasted the violet ice cream (it can still be consumed today) – Gabriele D’Annunzio – habitual visitor, who, as a bet, wrote the famous poem-song “A Vucchella” – Matilde Serao – who founded “Il Mattino” between a coffee and a pasta dish – Oscar Wilde, Jean Paul Sartre.