When via Toledo became via Roma - Gran Caffè Gambrinus

When via Toledo became via Roma 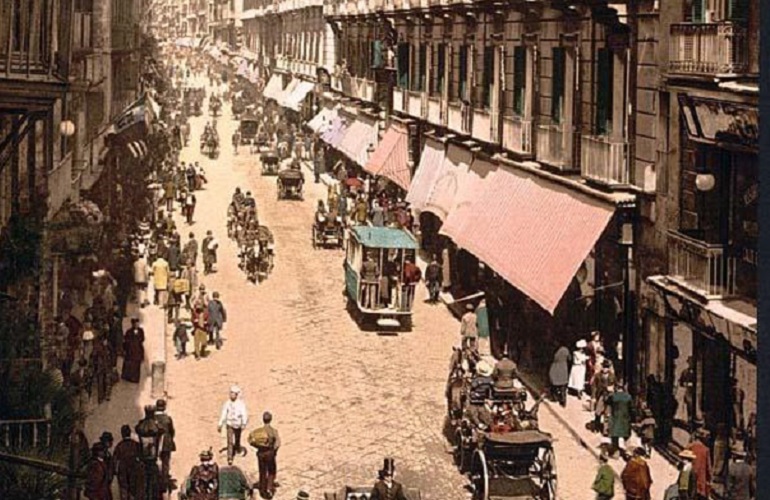 Gran Caffè Gambrinus is the meeting point, with its clubs, of at least four major streets and Neapolitan Squares: via Toledo, via Chiaia, Piazza Trieste and Trento and Piazza Plebiscito.
By the way, via Toledo or via Roma?

Perhaps not everyone knows that, for the nomenclature of this road, the Neapolitans have even divided into factions, arguing and protesting for days.

But let’s go in order.

Year 1536. The Viceroy of Naples, Pedro àlvarez de Toledo, commissioned to the royal architects Ferdinando Manlio and Giovanni Benincasa the construction of the road, which was to extend along the old western walls of the Aragonese period which, due to the defensive extensions, had been eliminated by don Pedro, because it is considered obsolete. The road became an important connective hub for the people and businesses and established itself as one of the nerve centers of the city.

In 1870, however, something happened.

On 10 October of that year, in fact, the then Mayor of Naples, Paolo Emilio Imbriani, thought well to set aside any Bourbon memory, proposing to change the name to the street: the ancient Via Toledo would become Via Roma, in honor of neo-capital of the Kingdom of Italy.
The opinions were divided, immediately, into the city council, between favorable and against: change the name of a whole place (1.2 km long!) After 334 years, after all, it seemed almost a gamble, a change of traditions; no one even thought of the Bourbons or the Spanish viceroy, pronouncing that name, had become an integral part of the Neapolitan social fabric. At the same time, naturally, there were those who saw in that nomenclature an ancient heritage and reference to a period of foreign domination of the city. Yes, it was as if erasing that name from toponymy, Naples resumed, for them, the “dignity” lost in the moment in which it “surrendered” to foreign domination. But can a “forgotten” event really become invisible and, almost, “never happened”? Of course not.

In the end, we opted for a solution that suited the so-called “in medio stat virtus”. The street would have been called “via Roma already via Toledo”. But the sop, enough to quieten the minds in the council, was not at all satisfactory for the Neapolitans, who even formed the famous “Pro Committee via Toledo”, which also saw the adherence of famous people.

In any case, for a very long time (over 100 years, until 1980) the decision was indisputable and the old street plates were replaced with updated ones. But as always happens with the fiery Neapolitan people, for a while it was necessary to watch them during the night, to avoid vandalism and havoc.

It was on that occasion that a curious nursery rhyme was born that still echoes among the elders of the city:

Why Aversa? It ‘s simple: there was located the first asylum in Italy, the Real House of mad, opened in 1813