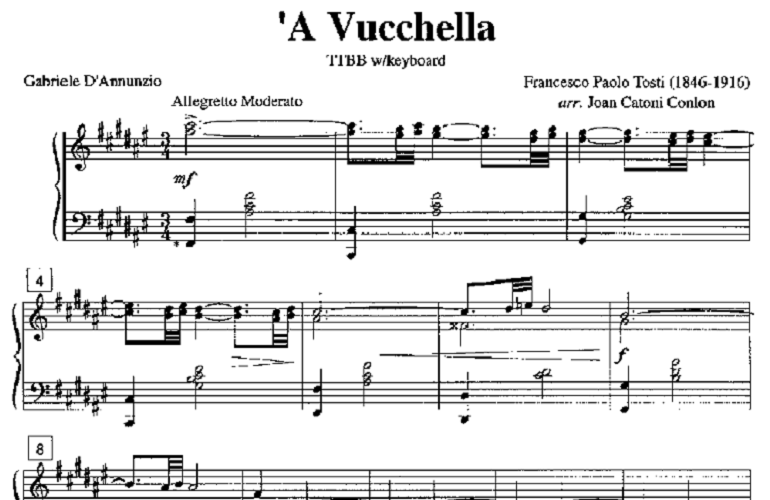 A vucchella, a classic of Neapolitan song

The Neapolitan song has made history in the world, but each of its songs contains within itself, in turn, another story.

Among other things, it may seem almost incredible, but this great classic of the Neapolitan musical tradition was not written by one of our fellow citizens … but we should be used to it, the estimators of Naples who have dedicated songs and verses in their mother tongue are many , even among “foreigners”; just think, for example, of Lucio Dalla or Renzo Arbore.

We are in the year 1892: Gabriele D’Annunzio, was in his Neapolitan period (1891-1894) and worked at the editorial office of “Il Mattino”. His colleague was Ferdinando Russo, author of Neapolitan songs. It seems that everything was born of a simple bet: Ferdinand, in fact, challenged D’Annunzio on his ability to compose lyrics in Neapolitan dialect. The difficulty lay precisely in the fact that the poet was from Abruzzo!

And it is precisely at a table of Gambrinus, always a haunt of poets and artists, accompanied by a good coffee, that the writer would give life to these verses, then later published and music.

Some say that it was D’Annunzio himself who sent the lyrics to Francesco Paolo Tosti, also from Abruzzo, for the composition of the music, and who, on the other hand, reports that the text was delivered to Russo, who kept it until 1904, and then sent it to Tosti.

In any case, the song was published by Memories of Milan with the original date of composition and was a success, even though it was not the result of Neapolitan authors.

The rest is history.

Enrico Caruso, Luciano Pavarotti and Roberto Murolo have made great Naples and the Neapolitan song all over the world thanks to this song![:]