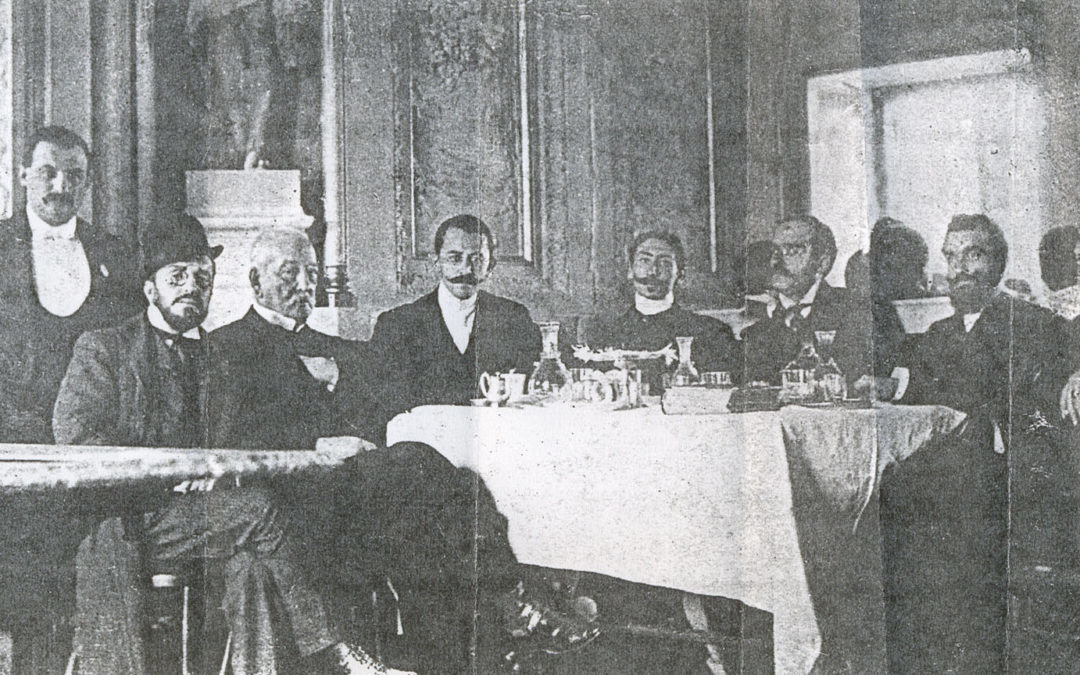 Much history of the Belpaese has been made within the walls of various Cafés scattered on Italian soil. In fact, starting from the 18th century, writers, poets, philosophers, jurists and politicians, who make them their favorite haunts, are assiduously frequented by the best cultural exponents, where we can taste the tea, chocolate and of course, at the cafe – and sometimes seeing the most innovative performances of music and acting, they find the right inspiration to compose and conceive, get together and debate, make political programs and … conspire! Without modern media, including the web, it is the cafés that constitute the inexhaustible forge of cultural avant-gardes, the sounding board for new ideas, exclusive locations where you can have fun and drink at the page but, also, join, discuss and discuss. It is in the Cafes that, often, listening to a song or admiring a ballet, sipping a drink or tasting a pastry, artists and writers create, politicians and journalists give life to parties and newspapers, patriots and politicians dream of a country free from the foreigner, Republican and democratic. Here, then, is a brief overview of some of the Italian Historical Places that have most influenced the history of our country from the perspective outlined above.

Before the Austrian occupation the “Serenissima” was an independent and independent republic for centuries. The Venetians have never accepted the submission to the government of Vienna, often opposing it even in arms. Headquarters of the uprising against Austria in 1848 is the Caffè Florian from where the conspirators demand the liberation of the patriots Tommaseo and Manin. The ancient café in Piazza San Marco was, not surprisingly, frequented by personalities of the caliber of Parini, Pellico, Berchet and Foscolo.

In the Savoy Kingdom the Cafés are the places of politics. Il Cambio is the real political office of Cavour; the Fiorio is frequently visited by Carlo Alberto of Savoy who gathers the moods of the people; the San Carlo is the meeting place of Rattazzi, D’Azeglio, La Marmora; the Bicerin, on the contrary, that of opponents like Silvio Pellico

In Milan, Caffè Cova is the living room of the circle of patriots promoting 5 days of Milan in 1848 and where Mazzini and Garibaldi often sit.

The Caffè Tasso in Bergamo, centered by an Austrian cannonade in 1859, soon became a recruitment center for the Garibaldi expedition.

From the Caffè Tommaseo of Trieste the patriots move, and in 1848, with the cry of “long live Italy”, the struggle against the Austrians begins.

Specialist in celebrations of events is the Caffè Fantoni in Villafranca di Verona, where Umberto biscuits were created in honor of the prince of Savoy, heir to the throne who fought in the battle of the Quadrato, the cake of peace for the armistice of Villafranca in 1859) and, after some decades, the Acqua di Fiume to remember the occupation of the Adriatic city by Gabriele D’annunzio and his “legionaries”.

The historic Caffè Pedrocchi of Padua houses an important museum of the Risorgimento. Frequented by Italian patriots who opposed the Austrian regime, in 1845 it inspired Berti, Crescini and Stefani, to give life to the weekly satirical sheet called just like the local “Caffè Pedrocchi”.

Going down the boot the Caffè dell’Ussero also becomes a meeting place in Pisa of patriots like Domenico Guerazzi (suspended from the university for his ideas), Giuseppe Montanelli (volunteer) and Giuseppe Giusti (author of the Memories of Pisa) and Mazzini.

In Florence it is from Gilli that the local volunteers engaged in the battles of Curtatone and Montanara of 1848 depart, while the Paszkowsky in 1914 is the meeting place of supporters, such as Papini, Soffici, Palazzeschi and Cesare Battisti, of Italy entering the war ( WWI).

In Rome, the Antico Caffè Greco is the place where the patriots of the Risorgimento love to come together.

Opponents of the Bourbon government, also find themselves in the main Neapolitan cafes during the 1800s, so much so that they become the object of the attention of the police of the kingdom that, several times, intervenes with restrictive measures to cool the subversive spirit of the Cafés. The young Neapolitan liberals gathered at the Caffè dell’Infrascata, in 1801, shouting “live freedom”, assaulting a royal officer. A few months later the rebels are captured, tried and whipped with the “tacchero in bocca” (a sort of piece of wood that was placed in the mouth to prevent the condemned from speaking or shouting). Students from Calabria, Sicily, Puglia and Basilicata find themselves conspiring against the king at the Caffè below Buono in Toledo street. It is in the Caffè delle Quattro Stagioni in Via del Molo that a group of intellectuals give life to the periodical literary critic called “Il caffè del Molo”.

An ad hoc call for tenders – In the two-year period 1848-49, outbreaks of riots and protests erupted across Europe, leading to real armed revolutions. The Neapolitan people tried to establish a parliament and to modify part of the constitution of the Kingdom of the Two Sicilies. King Ferdinand II responded with a fierce repression that caused over 500 deaths and ordered the dissolution of parliament. In 1849, even after these events, the Prefect of Naples, with an ad hoc ban, limited the activity of the Neapolitan cafés “accused” of having hosted carbonari and rioters.