Gambrinus: between history and culture 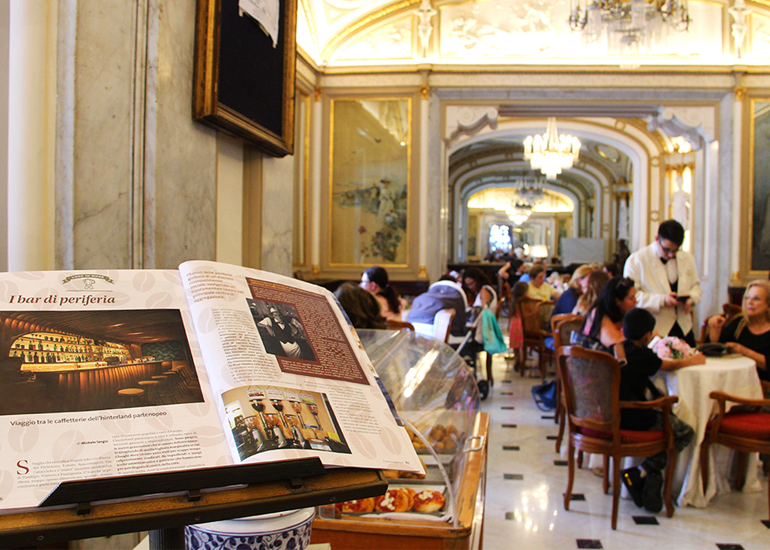 Naples has always been a city of a thousand faces, where sacred and profane, elegance and simplicity have continually coexisted and dominated the scene, creating contrasts and light and shade worthy of the best Renaissance paintings.

Precisely this characteristic has always made it an interesting destination for many tourists, not only, but also for writers, artists and intellectuals who have found in his panoramas inspirations for songs, then become famous all over the world, or for books, art and poetry.

Naples, in fact, was also the obligatory point of what was called the Grand Tour, that all-European journey carried out by the rich young people of the aristocracy, more or less starting from the XVII century, with a purely cultural mission.

Many of these prominent personalities, inevitably, also found themselves passing through the Gran Caffè Gambrinus, the liberty lounge in Naples that, for almost 160 years, has been the heart of the historic center of the city.

The evolutions of the Gambrinus

The premises of the Gambrinus were already there when they sparked world conflicts and were, in time, witnesses of many important historical events of the city of Naples.

It all started in 1860, with the fall of the Kingdom of the Two Sicilies: inside some rooms of the old headquarters of the Royal Palace’s guest quarters, the entrepreneur Vincenzo Apuzzo gave life to this place that,probably, he could not imagine that he would have identified an entire era as well as the city itself..

The result was a good-natured challenge with one of the first bars ever founded in Naples, Caffè Europa in Via Chiaia di Mariano Vacca, with elegant parties, important guests and excellent minds.

Unfortunately, only a few years later (1885) this “good life” began to become too burdensome and the coffee found itself in bankruptcy, so much so that it had to close its doors.

After only 5 years, however, Vacca bought the premises, put them back in order and modernized them, letting them invade by an increasingly elitist public: the atmosphere that had been recreated, in fact, was practically unique, as some artists had decorated the walls and ceilings with their own works, giving life to an unusual gallery of contemporary art.

What we know as Gran Caffè Gambrinus, therefore, officially opened in 1890: the name is a tribute to the bacchus of beer.

Among the greatest journalists Neapolitan and national artists, his tables have also hosted leading figures worldwide, such as our native Gabriele D’Annunzio or Oscar Wilde.

And it is from these days that works such as “‘A vucchella” were born, the song written by D’Annunzio, and Ferdinando Russo in a sort of challenge to the last ink, “‘ O sole mio” or the traditional ones ” French Spingole “and” Funiculì funiculà  “.

Luck, however, has not always turned in favor of this place so renowned, so much so that, after a period of shining splendor during the Belle à‰poque, in 1938 was imposed closure by clamor by the prefect Giovanni Battista Marziale, who lived in around and ensured that his wife’s sleep was constantly disturbed.

Thus, until 1952, the spaces left in the shadows by this provision were occupied by the Provincial Administration of the Banco di Napoli: yes, Gambrinus became the branch of a bank!

Finally, after this long pause, the restaurant managed to come back to work, until today to offer a good coffee or a tasty sfogliatella even to influential and important modern figures such as, for example, the German Federal Chancellor Angela Merkel.