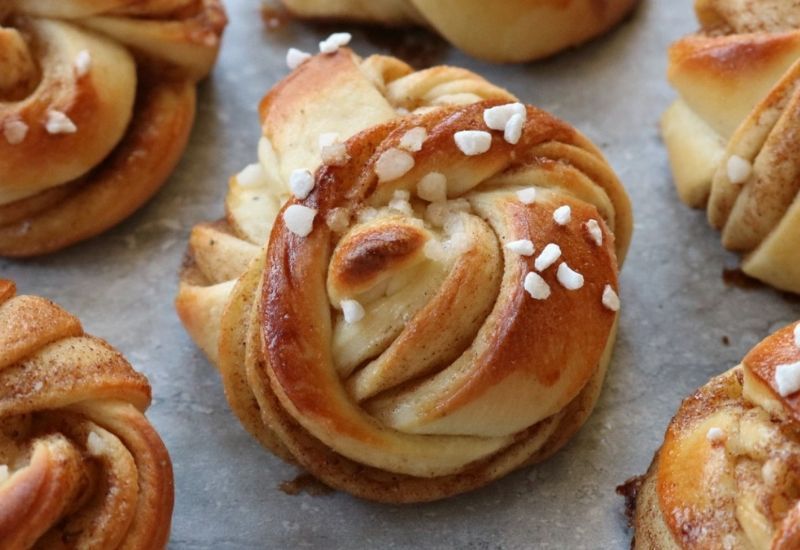 Since IKEA opened its offices in our cities, Sweden suddenly seemed to us a land much closer and “within reach”, despite the enormous geological and geographical differences that separate us.

But in reality, there is much more of this country that we can touch with our hands every day: an example is the kanelbullar, the typical Swedish dessert also offered in the Gran Caffè Gambrinus premises!

A bit of history

For us Neapolitans it will seem almost unbelievable, but it seems that, until the twentieth century, the bread available in Sweden was absolutely different from that to which, now, the whole world is used: for example, there were soft rolls with sugar, those that we call “bacetti”, but in those days they were considered delicious food, so much so that they cost a fortune.

A first ancestor of modern bread was precisely the kanelbullar, a kind of bread created with a “girella” rolled dough, made with cinnamon, wheat flour, sugar, butter, cardamom and other spices: it was the first real use that cinnamon found in the country, once landed within its perimeter, and finds its indicative dating around the 1920s.

Easy to prepare – even by recycling leftovers from the pantry – and with a particularly intense taste, thanks to the spices introduced into the recipe, the kanelbullar quickly made its way also and above all in the poorest families, during the First World War, finding a wide response among the children who they adored its aroma and could therefore be easily satiated in economy.

No one knew, however, that there were also many nutritional benefits in this pinwheel of bread, since it has recently been shown that cinnamon reduces the level of sugar in the blood, making it an unsuspected antagonist of diabetes, and that cardamom even has anti-inflammatory properties and antibacterial.

The result was a real myth – also made of variants prepared by changing the quantities of the various ingredients – so much so that this sweet has become a real “grandmother’s remedy” and the aforementioned IKEA has, in fact, always distributed it in its supply chain, both at the refreshment points of the stores and in its food and drink shops.

Even today, in Sweden, the kanelbullar is a snack that no one gives up, especially during the ritual coffee break: the government has estimated that the average is 230 units of candy per capita per year; practically almost one a day! The same statistics, however, have also revealed how, compared to 1990, the price of each single kanelbullar has increased by as much as 72%: an economic obstacle which, however, has not hampered its popularity but, on the contrary, has gone hand in hand. step to it.

In fact, in 1999, the Swedish Ministry of the Interior held a dedicated national holiday, which is celebrated every October 4th: the Kanelbullens dag, to give the right resonance to a dish symbol of the country that has been around the world (and kitchens of housewives).

By now, the smell of kanelbullar is the fragrance of Sweden.