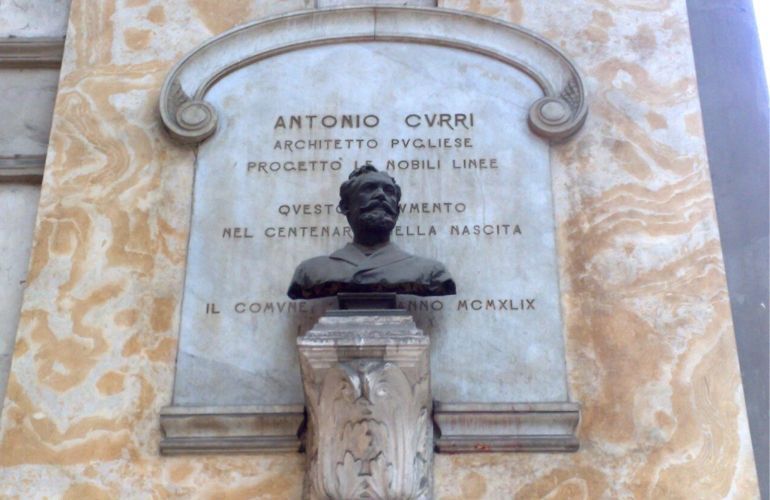 The architect of the Gambrinus and of the Galleria Umberto I in Naples: Antonio Curri

We are experiencing strange times, times to which, fortunately, we are not used to anything and that force us, for better or for worse, to deal with ourselves, with our deepest reflections and with our passions.

At a time when we find ourselves having to deal with the strange feeling of self-imposed quarantine, many of us are rediscovering the pleasure of playing an instrument, of doing distance training, of engaging in long sessions of cinema and TV series. desire to take a journey through time together with the Gambrinus staff, we thought, therefore, to go forward with you in the history of the architect who gave us the wonderful and sumptuous Gran Caffè – as we know it today – which has dominated since its foundation, the history of the city of Naples: Antonio Curri.

From Alberobello to Naples

Although Curri has dealt with the restoration and decoration of the Gambrinus, the decorations of the Galleria Umberto I and the Garibaldi Theater of Santa Maria Capua Vetere (the so-called “little San Carlo”), its origins do not lie, as one might think, in Campania.

In fact, the architect was born in Alberobello, in Puglia, the second of eight children.

His life, however, intersected in Naples because it was precisely here that he married Maria Giovanna Rongo.

Antonio Curri was a rebellious schoolboy and a lively boy. In Martina Franca, in the province of Taranto, he took drawing lessons and let himself be enchanted by the appeal of Garibaldi’s shirts: he arrived in Naples only in 1865, when he enrolled in the Academy of Fine Arts.

Once he graduated, he returned to his hometown and began to dedicate himself to the construction of Palazzo Perta, which kept him busy for two years until he returned, again, to the capital of Campania, where he settled permanently becoming a professor at the Academy.

The architect’s commitment to our city has been truly intense:

Furthermore, during his Neapolitan life he also worked on many other projects, which were presented and, in some cases, even rewarded. To remember also the drawing of the cradle offered by the Municipality of Naples to the Crown Prince Vittorio Emanuele and a very large series of paintings, one of the most famous of which was made on the occasion of the papal jubilee.

Other works have kept him busy in Sarno (decoration of the facade of Palazzo Bouchy and the town hall), in Torre Annunziata (a silver ciborium for a church), in Rome, in Basilicata and even in Calabria.

In short, she was one of the great prolific personalities who lived between the nineteenth and twentieth centuries: indeed, when he died in 1916, he left a chair of decorative architecture at the Artistic-Industrial Institute that had been entrusted to him just a few months earlier.

We have reached the end of this story but don’t worry: we are already working to surprise you and keep you company next week too!