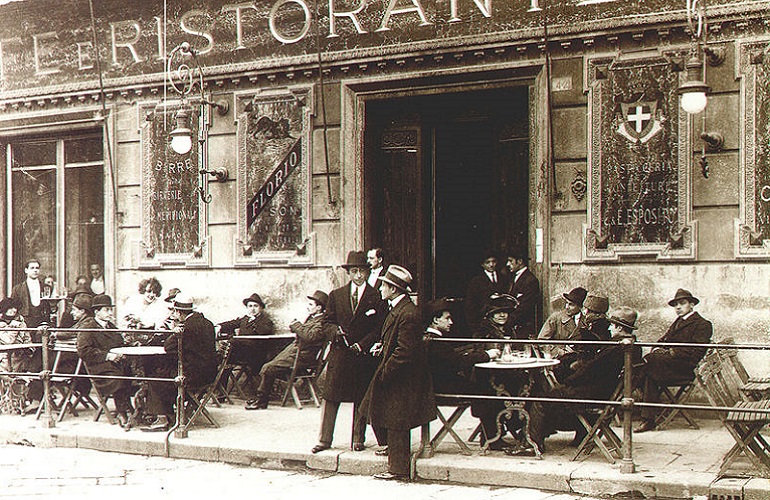 The Art Noveau of Naples

Gran Caffè Gambrinus has gone through more than a century and a half, together with the Neapolitans, between foundation, evolution, customers from all walks of life and great artists, benevolence of the royal family, suspended coffee, Chantant coffee, closing during fascism, reopening in the post-war period and much more.

It is the entrepreneur Vincenzo Apuzzo for life, in 1860, when in Europe the current of Art Nouveau prevailed, which in Italy began to take the name of Liberty Style, from the well-known London merchant Arthur Liberty who, in his warehouses, exhibited pieces of art and fabrics inspired by the current of the late nineteenth and early twentieth centuries.

It did not take long because this architecture embraces many fields, even on a social level: architecture, interior furnishings, urban decoration, jewelry, furniture, textiles, objects and even tools, lighting and funerary art!

The origins of the movement are to be found in the Anglo-Saxon Arts and Crafts, another artistic wave born by reaction (cultured, it is about artists and intellectuals) to the industrialization of the late nineteenth century. The artisan was the new “hero”, the only one able to create unique pieces, in contrast with the mass production and mechanization that had killed, in some way, the art.

This is where the inspirations for design and modern architecture were born from.

And that’s why the Gambrinus still jealously preserves the aesthetic lines of that period, including the stuccoes, the soft lines, the paintings and the statues that animate it, despite the maintenance and the evolution of its long period of Neapolitan history. Among the many, inside, you will also find works by Gabriele D’Annunzio. Also the Vomero and Posillipo, which at the time were districts in urbanization, began to populate of important buildings adorned with elements (lamps, balustrades, doors, chandeliers, handrail) in wrought iron, bright windows, towers and pillars, floral decorations, in an atmosphere that, for Naples, was new but also “traditional”, given that the city had always been a focal point of its existence.

On the other hand, the railway station of Mergellina, the Cumana terminal and the Montesanto funicular also respect the same style, also recalling the Amedeo district, San Felice, via Palizzi, San Pasquale and Parco Margherita, which host important buildings built in that same historical moment and that still recall, together with Gambrinus, the Naples of that period.