The great Bourbon Carnival of the Kingdom of Naples 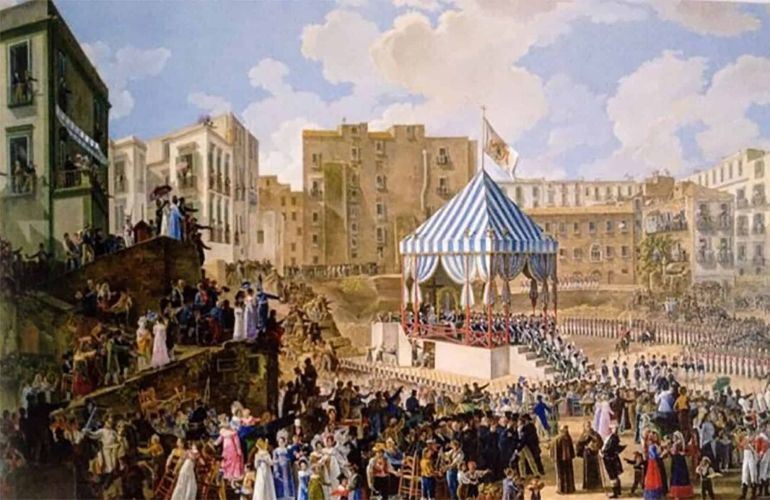 The Carnival, as we know, in Naples is a very heartfelt anniversary, loved by young and old for its cheerful and lively connotation but also a symbol of Christianity and the expectation of the imminent Easter.

The day that identifies this festival, in our city, is Shrove Tuesday, that is, the one that closes, in fact, the carnival period: but few know that, once, the Kingdom of Naples reserved a very special celebration for this moment of the year; were the times of the great Carnival at the Bourbon court.

When Charles of Bourbon (progenitor of the Neapolitan Bourbon dynasty) arrived on the throne of the Kingdom of Naples he was still a bachelor: the wedding vow would be ratified only in October 1737; for this reason, the Carnival of that year intersected with the bachelor party celebrations, so much so that it lasted for many days, reaching February 22nd.

In truth, the Carnival at the Neapolitan court of Carlo di Borbone had always been among the most awaited celebrations of the year by the population: on that occasion, however, the entire Neapolitan society agreed to put in the square an event that would become unforgettable and remain etched in history. Indeed, much of the glitz and the fun, it seems that the king of Salerno arrived in Via Toledo with his carriage and eleven knights disguised as commoners who, from the windows, threw colored confetti at the citizens, in a scene that has remained carved in the memory of the city.

At Carnival every joke is worth, it is said, but at the time the irreverence was also much higher than the modern one: it was customary to vote the disguises to the “overthrow”, so the women disguised themselves as men (and vice versa), the nobles instead, they poured out into the street in the clothes of commoners and the less well-off, on the other hand, had fun mimicking the richest and wealthy classes with a sound of irony. In short, the dominant theme was ambiguity, to the point that the atmosphere was peppered with very particular odalisque shows: it was, in fact, men disguised as women, who highlighted their virility through special padding in a way that after all, it is very reminiscent of modern Drag Queen.

All around, in the meantime, ladies, knights, musicians and artists set up the stages for other performances and the streets were filled with banquets and delicacies that transformed Naples, for a few days, into a real country of the cuccagna.

On Fat Thursday of that “infinite” Carnival, the grand ball was held, in whose court the entire population dressed in precious clothes made by royal tailors took part: the king, in particular, showed himself in a sumptuous Indian dress, first, and in an allegorical costume of Neptune (god of the sea), then. A young promised bridegroom was the one who sat on that throne at the time and many girls he had fun inviting to dance; time passed in a flash and the celebrations went on until late at night, every day of this strange Carnival, while in the royal lodgings it seems that all the colors happened, thanks to the carefree air and the drunkenness.

In short, it was a unique opportunity to live, that of 1737, also because, with the arrival of the queen (despite being only a teenager at the time of the wedding), the celebrations became decidedly more sober.

The Bourbon was not only a carnival of irreverence and debauchery: the children, in fact, awaited the arrival of the old ‘e carneval’, impersonated by a very particular puppet, where an elderly woman, with a young body even with a prosperous breast, he carried a Pulcinella on his hump wrapped in his typical white shirt and hidden by the classic black half mask. This strange silhouette paraded through all the streets of Naples followed by a procession of young people who, with the sound of a whistle (a wooden wind instrument similar to a flute), sang popular songs while, from the balconies, the citizens threw small offers and gifts .

They were incredible celebrations, in which all the popular classes happily coexisted: on the other hand, after the liberation from the “taccagni” Viceroys, Naples rose to new life also thanks to the generosity of the first Bourbons. And that was exactly how the famous “cuccagne” were born: four great parties, given by the court to the people, in which the plebs could feed themselves at will in the presence of reproductions of temples of divinities and representations of various kinds, including even the siege of Troy.

This carnival magnificence lasted until the end of the 18th century, reaching the highest expression of elegance and conviviality in that period.