The restyling of the San Carlo Theatre | Gran Caffè Gambrinus

The restyling of the San Carlo Theatre 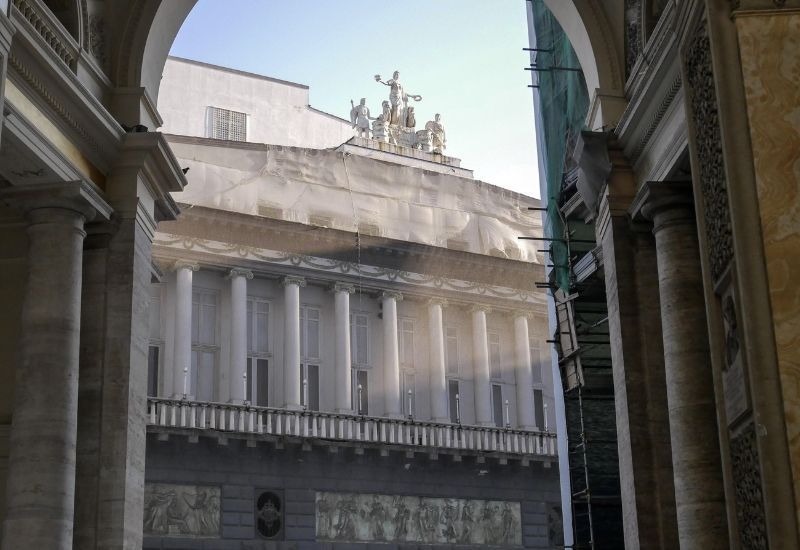 Great news in sight for the San Carlo Theater.

At the end of May, in fact, the project for a restyling of the façade was presented at a press conference which, as per the contract, should last about 5-7 months, cost over 1 million euros and be concluded in conjunction with the opening of the new 2019 opera season (scheduled for September).

An important restoration that will become a watershed between the “first” and the “after” of the San Carlo, since – according to official news – the facade of the building should completely change color.

Innovations that blend with tradition

However, the most traditional conservatives are not afraid of anything: the intervention will preserve the original structure and aesthetics of the facades concerned – initially those on the side of the Galleria Umberto I and the Via San Carlo side, then the west side, on Trieste e Trento Place -; therefore, all the neoclassical references will remain and the entire work, obviously carried out by skilled labor in the sector, will be continuously supervised by the Superintendency. Therefore, the preservation of historical authenticity, stratified over time, is not in danger, but very precise colors have been chosen to carry it all forward: certainly we know about the presence of lime milk with lights and dyes with natural mineral earths, a combination that should bring a white marble and shades of gray where, today, we see that greenish dull and ruined. Even this aesthetic change, which may initially appear radical, is actually the result of experimental analyzes that have studied the best color to be taken into consideration.

After a first renovation in 2015, this new job was planned for January 2019 but, due to a series of hitches, it had been postponed to July: the goal is to restore dignity to a fundamental part of the theater structure, that external, after some detachments and collapses of rubble that had occurred in recent periods.

It is expected that the site will involve a part of Piazza Trieste e Trento, the arcade on Via San Carlo and which will be set up in the pedestrian area, where the underpass is located, extending to the entrance of the cafeteria: the scaffolding, however, will be arranged to 5 and a half meters from the ground and it will be possible to move inside a corridor created between the colonnade and the underpass.

We just have to wait for autumn to enjoy the new show … inside and out!