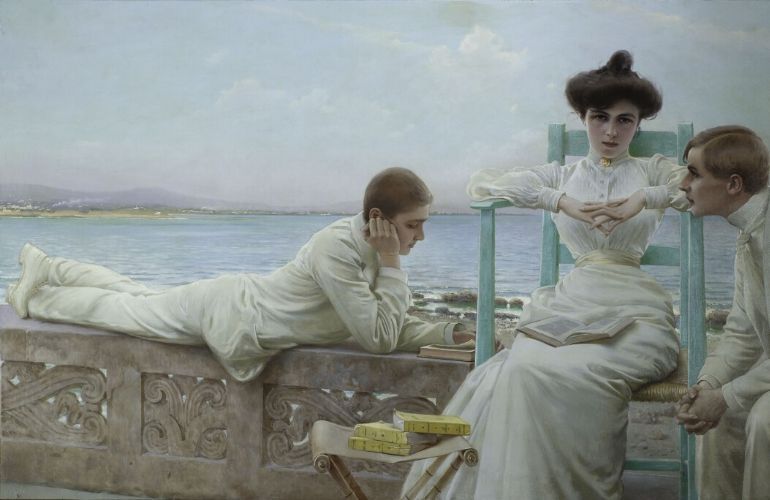 The women of Neapolitan literature

At a time when a fiction inspired by the pen of a contemporary Neapolitan writer (“The brilliant friend”) goes crazy on TV and a few days after International Women’s Day, it is right for the Gran Caffè Gambrinus – always the literary salon of Naples well – dive into the world of Neapolitan literature for women that has made Naples great in the eyes of the world.

In truth, it must be said that the women who wrote in very ancient centuries, from the fourteenth to the seventeenth century, are very few: in general they belonged to aristocratic families, to privileged social classes and in large part they were religious or daughters of great professionals (doctors, professors etc): it was the moment in history when, almost on tiptoe, we began to challenge male hegemony, to focus attention on the female question and on the dignity of women in general; but it would have taken much longer for these arguments to become dominant and to subvert the order of things little by little.

In the eighteenth century, women finally acquired an important role of their own in the cultural and intellectual world, also thanks to their commitment in literature: they began to assert an autonomous identity, of gender, arriving at the journalistic field also holding important positions (take over the first lines, for example, of periodicals); it all started from France and England until it involved Italy in the nineteenth century.

This is the moment when the woman became an explorer and ambassador of the female world itself.

Needless to say, the founder of this category was our local Matilde Serao, writer and journalist who lived between the nineteenth and twentieth centuries. From his pen a multitude of different works were born, from novels to ironic tales, touching, however, anti-feminism, probably because of his contacts with Scarfoglio (whom he married), D’Annunzio and other friends with this type of ideas.

A life so dedicated to writing that Serao, as is known, died at her desk, struck by a heart attack.

In a background in which, on the contrary, there was Sibilla Aleramo (Alexandrine, pseudonym of Rina Faccio), lived in the same period and voice among the most representative of Italian feminism, and appeared Grazia Deledda (Sardinian), first woman winner of the Nobel Prize for literature in 1926, the twentieth century was enriched by many valuable Neapolitan writers.

And this is how we got to the 2000s, where today the story of “The brilliant friend” keeps us company, which has become fiction but comes from the creative pen of Elena Ferrante, enigmatic contemporary author, of whom little is known: great admirer by Elsa Morante – from whom she says she draws inspiration and to which her probable pseudonym seems to be linked – keeps her life strenuously linked to anonymity, in order to be able to live in freedom, without the “hindrances” of success, leaving free the his admirers of fantasizing about his real identity; the theories that roam the web are many!

And you, which Neapolitan writers do you prefer? Which have marked your life?